The two cities will be connected through a ferry service for the first time.

The Spanish news outlet reported that the ferry will provide its services between the two destinations with a capacity of 347 passengers and 320 vehicles.

The Vocal del Tauce will change its course as it was serving a sea route between Motril and Melilla.

FRS said that they will replace Volcan del Tauce with Golden Bridge, which has a capacity of more than 1,500 passengers, 500 vehicles and cargo.

FRS said that the ferry will connect Mortil and Melilla in 5 hours and 90 minutes.

The new service, which will connect Granada with Tangier for the first time, will benefit Moroccan expats who arrive in the thousands in Morocco for summer holidays.

Tangier-Med authorities said last year that a total of 842,698 passengers crossed the northern port of Tangier-Med to enter Morocco since the beginning of the Marhaba operation in June until August 25, 2018.

With Ramadan around the corner, some Moroccans residing abroad might arrive in Morocco before the launch of the 2019 Marhaba operation to spend the holy month with their families.

Ramadan, according to a Moroccan astronomer, is expected to begin on May 7 in Morocco. 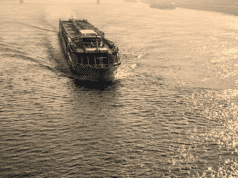