Where are Sahrawis able to live freely while enjoying all their rights? Is it in Morocco’s Southern Provinces or inside the Tindouf camps?

Rabat – “From Tindouf to Laayoune – Road to Dignity” is an investigative film produced by Moroccan TV Channel Medi1TV documenting the living condition in both sides, inside the Tindouf camps and Morocco’s Southern provinces.

The documentary, which will be aired on Medi1TV on Sunday at 9 p.m. (GMT+1), was displayed in front of a delegation of Journalists in Bayt Assahafa (Press House) in Tangier on Friday,

The documentary seeks to uncover the untold story about the humanitarian and social conditions of Saharawis in the Tindouf camps, which are often overlooked by human rights watchdogs.

In order to get into Tindouf Camps, Medi1TV sought the help of a Spanish journalist, Patricia Madjidi Juez. Medi1TV had to reach out to a Spanish journalist because Algerian officials won’t grant a Moroccan channel the permission to film in their territory.

The journalist visited the Tindouf Camps first, where she did not have the right to film or to freely speak with citizens.

According to Patricia, Spanish media reports about Morocco and Polisario do not reflect reality.

The journalist spoke with a Sahrawi living inside the Tindouf Camps. The Sahrawi, who decided to show his face to the world even though he is at risk of being “tortured” or even “killed”, narrated his own story reflecting the reality of Sahrawis’ living situation in the Tindouf Camps.

He stated that the humanitarian aids containing food and medicine never reached their final destination and are instead sold in the market in Rabouni. He added that anyone who speaks to international media or human rights organization is severely punished.

A report published by the European Union Anti-fraud Committee (OLAF) published in 2014 documented the embezzlement of humanitarian aid destined for the Tindouf camps 1975. The report, which was conducted between 2003 and 2007 and was only published in 2014, revealed that Polisario leadership and Algerian authorities have been involved in years-long, well organized large embezzlement of the humanitarian aid destined for the camp.

“One of the reasons which made such diversions possible is the overestimate of the number of refugees and thus of the aid furnished. This overestimation, well known, made possible and facilitated the diversions. The donors accepted population figures for which numerous witnesses say everyone knows that they are overestimated, without their assistance policy being modified accordingly,” says the report.

The man also claimed that he was subjected to torture and punishment. When his father and oldest sister died, he reached out to the Polisario’s so-called Ministry of Health which denied the responsibility and told him to remain silent.

Speaking with tears, the Sahrawi said that Polisario took him to an unknown place and raped him for revealing the awful truth about the front breaching international human rights.

“The Polisario government is almost inexistent and lives through the selling of the aid,” the Sahrawi told the Journalist.

The description of the humanitarian situation given by the Saharawi mirrors the findings of the EU OLAF report, which pointed that that the embezzlement of humanitarian aid is done in an “organized fashion” upon the arrival of humanitarian aid to the port of Oran in Algeria, during the trip from Oran to Rabouni in the Tindouf camps, and once the merchandise is stored in warehouses in the camps.

The report also revealed that “good-quality food intended for the refugees is replaced by its equivalent of a lesser quality, the best being sold.”

“If one day Western Sahara is independent, the world will witness an Algerian expansion into those areas,” he added.

When speaking to Sahrawi people in Tindouf, everyone pretends that everything is normal. But, the journalist could see the “fear” in their eyes, according to the journalist.

Hospitals have a serious lack of medicine and necessary medical equipment. The Polisario authorities decline it even though the mortality rate among children is high.

The journalist spoke with a former judge at the Polisario Front, Ahmine Ahmadou, who echoed the same declaration made by the Sahrawi.

At first sight, the journalist was surprised by seeing a Mcdonalds in Laayoune. She said that “it does not open in conflict zones.”

Patricia sat with many Sahrawi women in Laayoune and visited many socio-economic projects. She also met with the municipal president and other officials from the city.

Contrary to Tindouf, Patricia did not feel afraid of walking around. The documentary shows that Sahrawi women appear to enjoy all their rights and have many work opportunities.

Laayoune has the second biggest library in Morocco with the latest equipment. The journalist visited the regional hospital in the city where patients who have RAMED (insurance card provided by the government) are treated for free, a seawater desalination station working with wind turbines and solar energy, and supermarkets.

The documentary, which has sought to dispel Polisario’s allegation about Morocco’s exploitation of the natural resources of the territory, shows that phosphate production in Laayoune represents 2% of Morocco’s overall production. This production net profit is used to fund socio-economic projects in Laayoune-Sakia El Hamra the region. 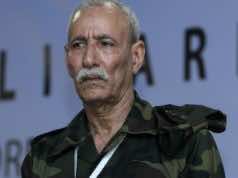