In the course of years of her discovery and adventures across Morocco, the kingdom has become integral to Alice Morrison’s identity. 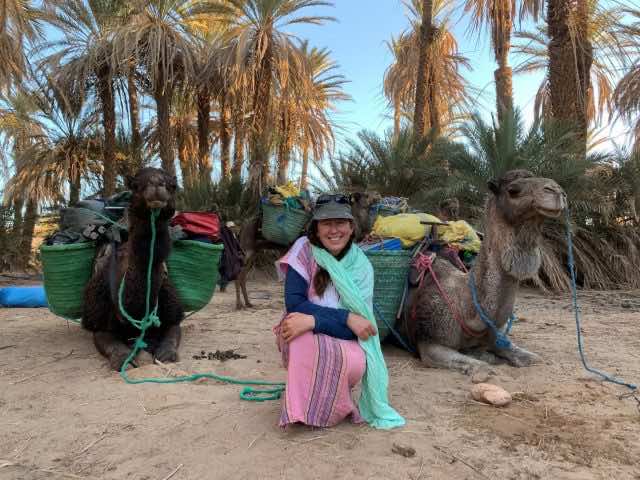 Rabat – Even for somebody with her pedigree in adventure and travelling as well as her religious attachment to what she calls “our shared humanity, common experiences,” Alice Morrison evinces an unyielding refusal to exoticize Morocco.

For the BBC journalist, who graciously describes herself as an “Arabian and adventurer,” the North African country, which she has come to see as her second home, is not only appealing because it is different from her native Britain.

Rather, what is exciting for Morrison is the daily reminder, even while living with people considered “different,” that “what we have in common far outweighs anything that we may have as differences,” she told Morocco World News.

Between January 9 and March 28, Morrison explored the Draa, Morocco’s longest river. The experience, she announced to the many enthusiastic followers of her adventures, was meant to capture the effect of humans on the environment. She wanted to see “what was happening” and how the region has changed in centuries of human life.

“I’ll be exploring the rich valley of the Draa and its ancient cave paintings and vibrant agricultural life…. It’s a voyage of exploration and discovery,” Morrison announced.

Halfway through her foray into the historical and social intricacies of the Draa valley, MWN spoke to Morrison about the aim of the expedition. Why Draa? What does it mean to crisscross a place for a long period of time? Did the exploration have anything to do with raising awareness about humans’ impact on nature?

“No. Not really,” she boldly replied to the last question, seemingly unsettled by the idea of exploration as social militancy. But, she acknowledged, the adventure did have something to do with climate change.

As an adventurer, Morrison seems more interested in “the enriching experience” of witnessing transformations in the world, but most importantly of making exciting discoveries and recounting those stories to other people “to inspire them.”

“Thousands of years ago people were living there,” she said of the large surfaces of desert dunes she saw during the expedition. “That makes you wonder … where people will be in a thousand years’ time. Will they be on this planet or somewhere else?

Morocco has historically been the darling of waves of Western tourists. From the inspiration and pilgrimage-themed trips of the beat generation pioneers like Jack Kerouac to the field research trips of scholars like Clifford Geertz, the North African country has nourished the imagination and sensibility of generations. Many who have travelled Morocco, including Morrison, confess to having fallen in love with the kingdom.

It is difficult to categorize Morrison among those who exoticize the country and its people to justify their love for a place that supposedly looks nothing like their familiar environment.

At the same time, it would be little exaggeration to suggest that Morrison’s experience as a decades-long adventurer is mostly occupied by the feeling of having visited “the soul of Morocco.”

Despite her efforts to conceal it, Morrison’s voice echoes with enthusiasm when speaking of the numerous encounters she has had while crisscrossing Morocco.

“Every single day there’s been something new. Every single day I’m discovering something new about the country,” she said, giving a list of “impressive” discoveries she made just one month into her Draa experience. The list included “a 16,000 km2 nature reserve” and “arrowheads from the Stone Age.”

A life of immersion

While most travelers’ obsession with history is more associated with self-serving sensationalism, an inclination to exoticize even the slightest differences, Morrison’s notion of discovery is much closer to a sense of genuine participation in the everyday of the people she meets.

There is in Morrison a desire to “sense and feel connected to the history” under her feet. Does it help, in the Moroccan context, that she has quite an impressive command of Arabic?

“Oh yes,” she answered, excitedly explaining how her knowledge of the language has made it easier for her to “feel home” and to be part of the collective experience of places in Morocco.

In his review of Morrison’s 2017 book “From Morocco to Timbuktu: An Arabian Adventure,” Sam Wollaston spoke of what makes the book a fresh window of experience in the world of travel writing. “Alice Morrison is fabulous for not being just another actor-comedian on the travelogue gig and for actually knowing stuff—such as Arabic.”

The article’s point is immediately obvious when speaking to Morrison about her numerous experiences. Shying away from prepackaged ideas, her reflections on the High Atlas region, home to the Draa River, are those of someone who has done her homework. She knows her subject.

On her blog and in her public talks, history is a recurrent theme. But hers is not a history of past glories and battles. When she speaks of history, she frames it in a sense of the necessity of cultivating a humane closeness to the past.

“One of the things that really surprises me is how much history there is just under your feet. In Morocco, you walk on history, and that is a metaphor for the world.”

Here, however, attachment to the past is not meant as a way of feeling nostalgic. Rather, it is meant as a pathway towards nourishing humility borne out of the consciousness that where we are living now will not be our eternal home, that “many generations have lived and worked here before us.”

For Morrison, exploring is caring. She does not simply visit a place, passively marveling at its natural spectacle of rivers, greeneries, or landscapes. In her view, while the physicality of being in a new place can be gratifying and even therapeutic, it should never be given precedence over the beauty of blending in, of connecting with locals.

“I like to be a human animal in the world. In the end, the most important thing for any of us is our relationship with other people.”

Morrison’s Morocco is more of a repertoire of faces, smiles, and welcoming words; of people—most of whose names she seems to remember with irreproachable accuracy—who have showered her with their generosity in the course of years spent going to and fro in Morocco.

When we spoke about the Draa experience, Morrison was being aided by “two Ibrahims,” both Moroccans, and Jean-Pierre, a Morocco-based French expedition organizer. She described them as “very kind.”

At bottom, Morrison’s philosophy is that travelling is didactic because it refreshes our perception, an invitation to see—and gradually unearth—the “pleasures of living.”

As she spoke, punctuating her sentences with emphatic enunciations and adorning her pauses with contagious laughter, Morrison’s expression suggested a climactic sense of being part of a universe of acquaintances that keeps expanding.

Being a “professional adventurer,” she stressed, has added layers of nuance to her self-definition, in addition to pouring cold water on most of her youthful ideas on the Orient and the Muslim world.

“The Forever Adventurer,” perhaps the most lyrical piece of journalism so far written about Morrison’s numerous adventures, presents her as being wedded to risks and challenges, but also to galvanizing humor and joy.

Alice Morrison, the article noted, “has painted her life in a way that makes it possible to continue feeding her wandering, nomadic heart with a hearty dose of courage and humor to accompany her ever-roaming soul.” While the description successfully captured the essence of Morrison’s long career, it says very little about her passion for and faith in human fraternity.

Her commitment to her calling—that is how she perceives her job—is as much about passion for life as it is about “responsibility for others.” But does not the latter part sound relatively Orientalist? How would Morrison respond to “natives” who may dismiss her “genuine love” for Morocco and Moroccans as another instance of “white privilege,” of Orientalism masquerading as care for others?

In immediate response, Morrison took a deep breath, an acknowledgement that this was becoming a slippery playing field. She sighed before quickly saying, “Of course I do understand that some see me as an Orientalist. I do not have control over what people think.”

Morrison, who seemingly cannot escape the complicated history between East and West, may be more accurately described as a reluctant Orientalist. Or, more in line with contemporary description, Morrison is “woke” about her unintended Orientalist inclinations.

Mindful of the general tendency among Western travelers to “do something” about the world’s problems, a superiority complex which the Nigerian author Teju Cole has called the “White-Savior Industrial Complex,” Morrison refrains from engaging in hyper-intellectual pronouncements about her journeys.

An adventurer’s job, she seemed to suggest, is to enjoy the treasures that cross her path, to excavate new meanings, and dive as deeply as possible into making random connections with people whose common humanity is life-enriching. Generosity, empathy, humanity, and responsibility are hallmarks of her vocabulary.

“I am not sure that is relevant to our conversation. I don’t think that is related to the Draa expedition,” she said with disarming civility when asked her opinion on Morocco’s current political trajectory.

“My job as an adventurer is to share my experiences and inspire other people.” Her suggestion, as she pointed out to MWN numerous times during our interview, is that the story of political success, or failure, of Morocco is Moroccans’ to tell, not hers.

We all want the best for our countries

Despite her penchant for cautious talk, however, Morrison is unrecognizably effusive when it comes to dissecting stereotypes. She is keen to demonstrate how ill-informed and “stupid” stereotypes of countries like Morocco can be in the West.

“We are all human beings. When the sun is hot, we all feel hot and thirsty,” she said. “Cultural differences should be celebrated, not something to part us. That is what I have learned as an adventurer.”

But Morrison can get political when speaking about some specific topics.

In June 2018, she wrote an elegant piece on the encouraging prospects of women’s rights in Morocco. While nuanced, the article was unmistakably congratulatory. It reads more like a hymn to Morocco, a vindication of what Morocco specialists have called the “Moroccan exception.”

“Picture an Islamic nation and women’s rights are probably not the first thing that springs to mind—but Morocco could be challenging that stereotype, armed with a legislation aimed at protecting women and a growing civil society movement…. Change takes time… but Morocco is showing the way,” Morrison’s article hammered.

Almost a year after such lavish praise of Morocco’s recent political reforms, does Morrison still hold the same view? “Yes,” she replied without hesitation. But how, why? Could she elaborate?

Dodging the question and reluctant to take any position that could easily be seen as a lecture, Morrison took refuge in pointing to universal longings.

“I think change takes time, and I think everybody involved in it has to try to work together towards it. I mean not just in Morocco, but my own country is going through a terrible crisis at the moment,” she said. “Politics is difficult; governing a country is difficult… We all are striving for the same things: better life for your country, your children, or yourself. Everybody wants the same things; it is just about how we can get there.” 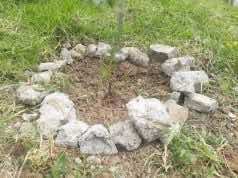