Will South Africa remain silent on Morocco’s call for cooperation like Algeria, which has not responded to Morocco’s 2018 dialogue initiative yet?

Rabat – Morocco’s Minister of Foreign Affairs and International Cooperation Nasser Bourita has urged South Africa to work with Morocco to achieve a better climate for cooperation, in an interview with the South African weekly newspaper the Sunday Times.

Citing their geographical location and continental sense of belonging, Bourita emphasized that Pretoria and Rabat should not experience bilateral problems.

South Africa’s latest move to undermine Morocco’s territorial integrity was in March, when it co-hosted a hostile meeting with Namibia to express support for Polisario’s independence claims.

Commenting on the event, Bourita said that the symposium was against the “UN process aimed at finding a solution to the regional dispute over the Moroccan Sahara.”

He added, “South Africa, as a member of the international community, must help with the necessary neutrality.” 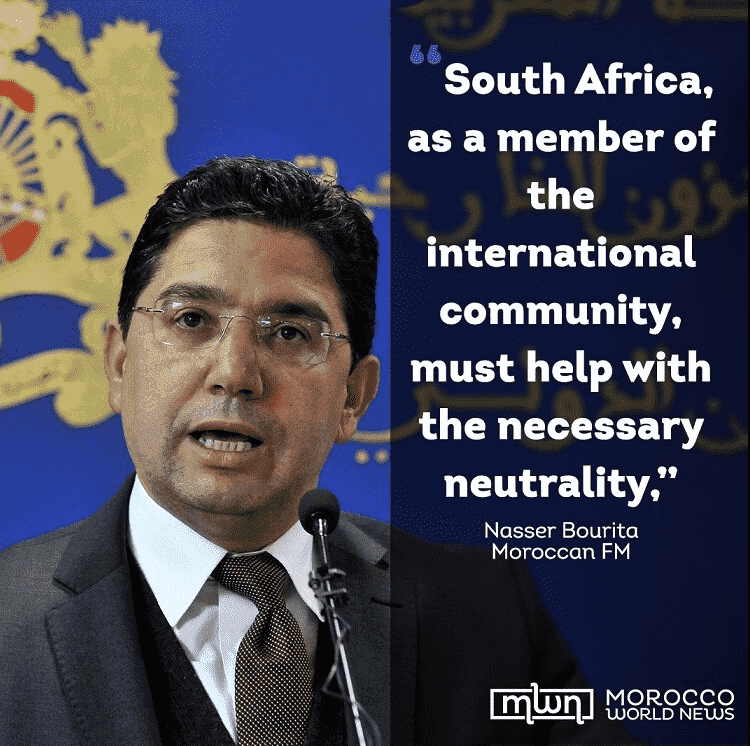 In a spirit similar to Morocco’s dialogue initiative to Algeria in 2018 to break a political stalemate, Bourita emphasized Morocco’s support for the fight of the South African people “against the apartheid regime.”

“We do not share the same borders, we do not have territorial problems,” Bourita said.

Bourita argued that the problems between Morocco and South Africa are due to Pretoria’s position on a conflict in a “region located hundreds of kilometers away, a position that runs counter those of the United Nations and the African Union.”

Ahead of the hostile symposium held by South Africa and Namibia in March, Pretoria’s President Cyril Ramaphosa had vowed to support the “struggle” of the Sahrawi people.

Addressing Pretoria, Bourita said: “Normally, if you are a country that works within the framework of the international community, you should help without bias or siding with a party.”

In 2017, German news outlet Deutsche Welle said that the “cultural heritage between Morocco and South Africa should enable the two parties to move forward.”

Bourita made the same argument, noting the countries have important economies in Africa.

Bourita added that both countries are “called upon to join hands to help Africa move towards the continent’s economic emergence.”

Western Sahara should not be compared to Middle East issues

Bourita argued that the UN had clearly defined the parameters in which a political solution to the conflict over Western Sahara should be fulfilled.

Bourita added that the UN framework calls for a “realistic, pragmatic, durable solution that is based on compromise.”

Bourita also stressed that the conflict over Western Sahara should never be compared to issues in the Middle East, such as the Palestinian case.

“In Palestine, the UN has adopted a resolution calling for a two-state solution. Regarding the Sahara, there is a political process to find a settlement with Algeria,” he said.

Bourita added that Israel’s presence in the Palestinian territories is globally recognized as an occupation.

Morocco recently hosted the African Ministerial Conference on AU Support for the UN Political Process on the Regional Dispute over the Sahara in parallel with South Africa’s hostile symposium against Morocco’s territorial integrity in March.

Bourita commented on Morocco’s event held in Marrakech, emphasizing that the conference was a measure to show that 37 African countries support Morocco’s position and that “the Pretoria conference should not be considered as a reference to the African position.”

Bourita added that the Marrakech event intended to show that the Pretoria conference was a means to “divide Africa,” recalling the consensus reached at the 2018 31st AU summit in Nouakchott to support the UN’s exclusive role in mediating the Western Sahara conflict. 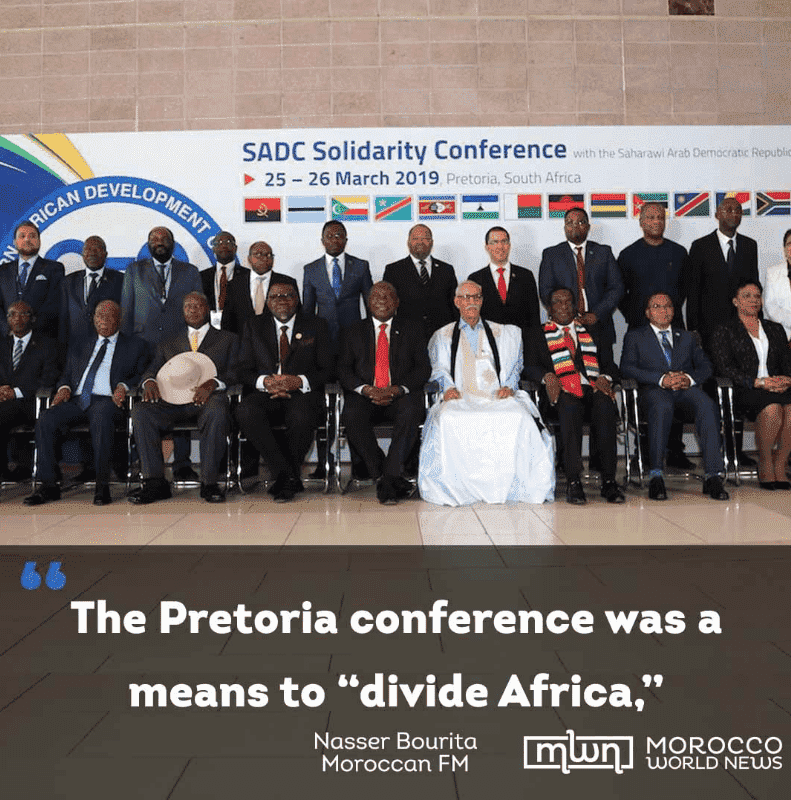 “Who divides Africa? Who decided that those who oppose Morocco should meet?” the minister asked.

“Our message was that unity was in Marrakesh and division was in Pretoria,” the Moroccan official said.