The fire could have been started by children who were playing in the area.

Rabat – A fire broke out in the guard’s room in the compound of the Dome of the Rock, home to the Al-Aqsa Mosque, in occupied Jerusalem. The room was near the Marwani Prayer Room, also known as Solomon’s Stables.

The room caught fire at the same time as Notre-Dame Cathedral in Paris.

Firefighters rapidly put out the fire with no deaths or injuries reported. The cause of the fire has not been determined.

The director general of the Jerusalem Waqf and Al-Aqsa Mosque Affairs Department, Sheikh Azzam al-Khatib, said the fire could have been caused by children who were seen playing in the area.

Al-Aqsa Mosque is the third holiest site in Islam. It was built on the top of the Temple Mount, known as Haram esh-Sharif in Islam. 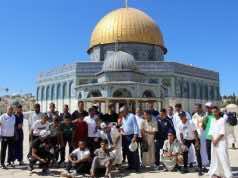