Furious at her recent demotion from her political family’s highest places, Maelainine accuses both her critics and former allies of cowardice and cheap vindictiveness. 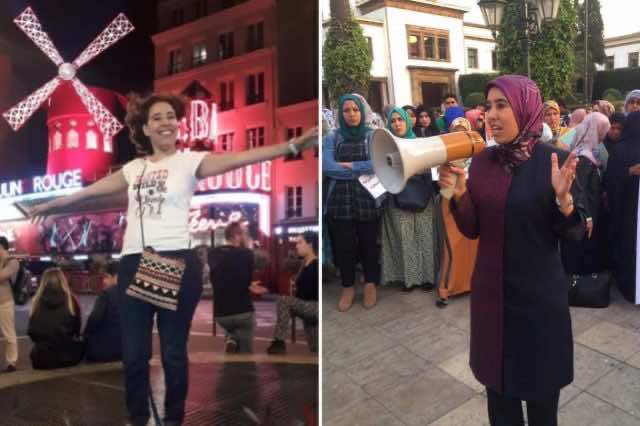 Rabat – MP Amina Maelainine, whom Morocco’s ruling Justice and Development Party (PJD) recently punished for her association with a “scandalous” clothing choice, has said she will not be silenced by insincere criticism.

Faced with criticism of hypocrisy from a number of Moroccans after pictures emerged in December of Maelainine walking unveiled while in Paris, PJD’s leadership lambasted the MP, who wears a veil while in Morocco.

On Saturday, April 13, the party finally decided to punish Maelainine, also a PJD member, by removing her from her position as seventh vice-president in the House of Representatives.

Maelainine, however, did not wait long to respond to what she perceives as an organized campaign against her personality and political convictions.

Taking to Facebook on Monday, April 15, the demoted MP reminded her critics that a coordinated attempt to silence and sideline her from the party’s highest ranks will not take away her outspokenness and passion.

“That many people have been quick to comment, analyze, and repetitively seek glory on the back of Amina Maelainine is a sign of lack of character,” the MP lashed out. She added that her critics’ behavior since the Paris scandal is “reflective of their inability to take much more heroic roles by espousing more honorable political opinions and causes.”

Maelainine rose to prominence in the aftermath of the 2011 general elections as the voice of the educated but virtuous and religious Moroccan woman.

To those who have suggested that the PJD’s decision to demote Maelainine will further complicate the MP’s political future, making her gradually irrelevant in national political debates, Maelainine said she will continue her fight.

“I want to point out that this is not the first time that the party’s secretariat general has opposed my candidacy for party leadership,” Maelainine wrote.

According to Maelainine, the hype has more to do with a desire to use her to advance politicians’ own causes. As far as the MP is concerned, those who attack her only sought to paint her in a bad light to make themselves look more principled.

However, while it “is normal” to prefer someone else over her for leadership positions, she stressed that critics’ “constant insinuations and selective condemnations” will not make up for their “lack of noble political convictions.”

While Maelainine has remained uncharacteristically silent since mid-January, when the PJD started debating her political fate, it is not the first time that the outspoken MP has taken sweeping aims at her critics, both outside and within the PJD.

In an interview with Moroccan weekly Al Ayyam in early March, Maelainine hinted at what other critics have called the “marketization of Islamic ethics.”

The idea is that there is an inclination in Moroccan political circles, especially politicians who seek to appeal to a largely conservative and religious electoral base, to take more interest in “smear campaigns” and other “trivial issues” rather than discussing more pressing issues, according to Maelainine.

She told Al Ayyam that there is a general tendency to “accord disproportionate importance” to people’s lifestyles and physical appearance rather than their actions and policies while in public office.

For all of Maelainine’s defiance, it is unlikely that she will appeal to critics, most of whom were convinced of her “hypocrisy” from the very outset of the Paris scandal. For Moroccan liberals, the PJD has already been discredited as a genuine “Islamist party.”

The Moroccan left has consistently held the view that the country’s ruling party only portrays itself—and falsely—as nationalist and Islamist in order to exploit the perceived gap between elites and “everyday Moroccans.”

The party’s aim, critics have argued, is to take advantage of the voting capital of low-income Moroccans considered as more attached to the country’s religious and traditional values.

Meanwhile, as the party seeks to wash itself of such criticisms of hypocrisy, Maelainine is increasingly viewed by many PJD members as a liability.

In an interview with Morocco’s 2M television channel on April 14, justice minister and PJD frontbencher Mustapha Ramid said that “time is up” for Maelainine. Ramid said, “No one has the right to have two faces.”

There are also reports that even Abdelilah Benkirane, former PJD leader and Maelainine’s traditional “protector,” is no longer supportive of his longtime “protegee.”

Meanwhile, Maelainine, loyal to her feisty and defiant self, is adamant that even unanimous rejection from her party will not silence her.

“I have worked hard, with devotion and engagement. I will continue this fight, which is not necessarily linked to holding leadership positions. I will continue fighting with the same passion and enthusiasm as before,” she wrote on Facebook.