The program hopes the degrees will facilitate prisoners’ integration into the labor market.

Rabat – The Moroccan General Delegation for Prison Administration and Reintegration (DGAPR) has announced that 133 prisoners obtained university degrees in 2018. Fifty prisoners earned general university studies degrees; 82 earned a bachelor’s; and one prisoner got a master’s.

In order to diversify the ways prisoners could study, DGAPR implemented an e-learning program supported by the United Nations.

To do so, DGAPR equipped prisons in Tifelt 2, Khenifra, L’oudaya in Marrakech, Toulal 2 in Meknes, and Ain Sebaa 1 in Casablanca with the necessary material.

DGAPR has also announced that it will dedicate spaces for educational courses in different prisons as part of an agreement with Mohammed VI University in Rabat.

The program is intended to better integrate prisoners into the labor market.

In 2018, 766 prisoners took and passed the baccalaureate exams. The figure represents a pass rate of 22% for Moroccan prisoners. 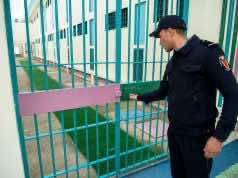 DGAPR Suspends Transfer of Detainees to Courts, Inmates to Hospitals