Reporters without Borders has ranked Morocco 135 out of 180 countries for safety of journalists, describing its media climate as “very difficult.”

Rabat – The media advocacy organization Reporters without Borders (RSF) ranked Morocco 135th out of 180 countries in its 2019 annual report on freedom of press.

RSF described Morocco as a “very difficult” country in which to practice journalism, along with 29% of all the countries it studied. RSF blamed the difficulties journalists in Morocco face on “judicial harassment.”

The organization reported that, in addition to legal proceedings against professional and citizen journalists, Moroccan “authorities deliberately obstructed the national and foreign media that tried to cover the so-called Hirak protests in northern Morocco’s Rif region, as well as reporting on migration, a subject that is now off limits.”

On Thursday, April 18, Reporters Without Borders released the report, which measures the degree of safety journalists have.

The outcomes are based on “pooling the responses of experts” through a questionnaire that measures pluralism, media independence, media environment and self-censorship, legislative framework, transparency, and the quality of the infrastructure that supports the production of news and information.

Morocco’s Ministry of Culture and Communication rejected RSF’s 2018 report as “biased” and “inaccurate,” arguing that Morocco enjoys “an atmosphere of freedom and independence, without any direct or indirect censorship.”

The report estimates the number of journalists killed at 80 in 2018. The organization found that Afghanistan was the most dangerous country to be a journalist, and the Capital Gazette shooting  made the United States another of the “deadliest” countries for journalists.

RSF was able to verify that eight journalists were killed as a direct result of their journalistic work in 2018, including one citizen journalist and one media assistant.

Morocco Remains Near Bottom in 2018 Rankings for Press Freedom 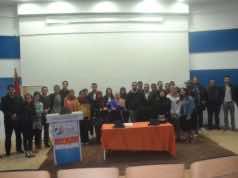 Moroccan and foreign journalists call for the release of Ali Anouzla