Morocco is taking part in Montreal’s International Aerospace Week to exhibit the opportunities it created in the aeronautic sector.

Rabat – Morocco is participating as an honorary guest in the 2019 Montreal International Aerospace Week, which kicked off on Tuesday, April 17.

Morocco’s Minister of Industry, Investment, Trade, and Digital Economy Moulay Hafid Elalamy is participating in the four-day event, along with other officials and aerospace professionals, including Canada’s Minister of Innovation, Science, and Economic Development Navdeep Singh Bains.

By attending, Elalamy aims to showcase Morocco’s ever-growing aeronautic market and the opportunities it has generated over the years. He also hopes to improve bilateral cooperation with Canada in the aeronautic sector.

In a speech, Elalamy said that Morocco’s aeronautics sector has stood out as an “interesting platform” for creating 16,700 jobs and currently has 140 aeronautics companies.

Morocco’s major objective in aeronautics is to boost its revenues to $2.8 billion and create 23,000 job opportunities by 2020.

Morocco has drawn significant investors, Elalamy said, referring to large manufacturers such as Boeing, Bombardier, and Airbus. It also has the largest Boeing 737 fleet in Africa.

Elalamy noted that Morocco has, since 2005, become a cost efficient destination, and the sector has grown 10 times in a 10-year span.

Within a 17-year period, Morocco witnessed considerable growth in the number of companies in the aeronautics industry, with 140 companies compared to 10 in 2001. 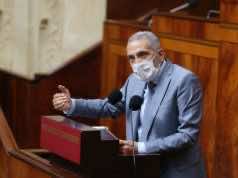