Rabat – The Moroccan Association for Human Rights (AMDH) has called on human rights minister Mustapha Ramid to come to the aid of Rabi Al Ablaq, a Hirak activist, who has gone on a hunger strike for more than three weeks.

The organization raised concerns about the “deteriorating” health of Al Ablaq, who was also a journalist at Badil. Al Ablaq’s brother had written about the activist’s health on Facebook, calling on Ramid to intervene because “the prison administration is reluctant to rush him to the hospital claiming the prison is too remote.”

The organization especially urged Ramid to intervene, informing him of Al Ablaq’s fragile condition and calling on Ramid to guarantee “his right to life and bodily integrity under the international law for human rights and article 20 of the Constitution.”

Recently relocated from Casablanca’s Oukacha prison to “Tangier local prison 2,” Al Ablaq is one of the Hirak prisoners whom police arrested for engaging in the Hirak protests that broke out in the Rif region, in northern Morocco, in 2016 and 2017.

A Casablanca court sentenced Al Ablaq to five years in prison along with 53 other activists—including Hirak leader Nasser Zefzafi, who received a 20-year sentence—on charges of taking part in unauthorized protests, disrupting public order, undermining the internal security of the state, and plotting against internal security.

Rabii Al Ablaq was rushed to the hospital in Casablanca in 2017 after he went on a hunger strike for 40 successive days.

Al Ablaq’s lawyer then quoted the journalist, who said, “I am officially announcing that I have ended the hunger strike … not for fear for my life or fear of death, but for the love of this land, which resides within our hearts, in spite of everything.” The lawyer said she conveyed Al Ablaq’s message with “honesty and abundance of love.” 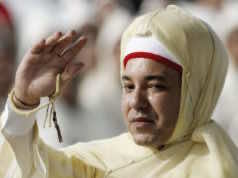