One of the suspects had five search warrants out for him for different crimes.

Rabat – The judicial police in Casablanca, in cooperation with Morocco’s General Directorate for Territorial Surveillance (DGST), have arrested four suspects in connection with a criminal network that robbed an agency owned by Al Barid Bank in the Ouarzazate province in southern Morocco on April 12.

A statement from the police said that one of the suspects had five search warrants out for him for different crimes.

The statement from the General Directorate of National Security (DGSN) said that an investigation led to the arrest of the three main suspects, two of whom are brothers.

The statement added that the three suspects are believed to be the masterminds of the armed robbery against the bank.

The police also arrested the fourth suspect for aiding the suspects by preparing a home to host them after the robbery.

Police, according to the statement, seized MAD 2,025,000 (about $210,600), in addition to other amounts of money of “different value in European, American, and Saudi currency.”

Police also seized a light bulb and a mask used to carry out the robbery.

Police are still investigating the crime to uncover more information and any possible additional suspects.

The investigation is ongoing under the supervision of the Public Prosecution and in coordination with the Royal Gendarmerie concerned with the location of the crime. 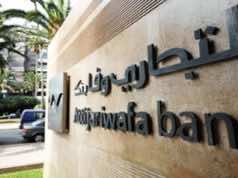