Universities from four countries around the world, including Morocco, will be sending neo-satellites designed by students into space to study the ozone layer and climate change.

By
Anton L. Delgado
-
Anton interned with Morocco World News as a news correspondent and staff photographer from March to May 2019.
Apr 22, 2019
Spread the love

Rabat – Moroccan students studying in Rabat and Fez have just completed the construction of two nano-satellites that will be launched into space in May to study the ozone layer and climate change.

The students are from the National School of Computer Science and Systems Analysis in the Mohammed V University in Rabat and the Private University of Fez.

According to Dr. Ouazzani Jamil Mohammed, the dean of the faculty of engineering sciences at the Private University of Fez, the team that built the satellites was composed of five students and a professor. The construction of the project took more than two months.

The KSF Space Foundation announced it will be providing a space capsule that will be used to launch the neo-satellites into space. Satellites built by students from universities in India, Mexico, and the United Kingdom will be launched alongside the ones from Morocco.

“Innovation is growing all over the world. Our foundation has an initiative that aids universities and developing countries that are building space programs,” Dr. Mohamed Kayyali, chairman of the foundation, told Morocco World News. “We want to encourage people, universities and countries to keep going for such great initiatives.

The capsule the foundation will be providing is a meter tall and weighs roughly 10 kilograms. Its exact cost and the materials used to build it are confidential.

“The materials we used to build the capsule will allow it to withstand all of the external pressures it will face in the upper atmosphere and in space,” Kayyali said.

The payload for this space mission will weigh approximately 50 kilograms. It will include the five nano-satellites, a high-definition imaging system, and additional climate change sensors.

The launch of the capsule is expected to take place during the third week of May, but according to Kayyali, that is subject to change because of the weather.

The launch site is in the coastal city of Chennai, in northern India. International dignitaries, including the Moroccan ambassador to India, are expected to attend.

After the launch, the two Moroccan universities will work alongside the other universities to analyze the scientific data the satellites collect. Their research will be in collaboration with the International Federation of Global and Green Information Communication Technology (IFGICT) based in North America.

“The IFGICT are the best people to analyze this data because they’ll make sure the information is understandable and they will make it available to the public,” Kayyali said.

According to Kayyali, the KSF foundation is currently planning on launching another space mission in October 2019. This mission, which Kayyali hopes universities will be a part of, will include the foundation’s first biological cell testing in zero gravity.

But its main mission will continue to be studying climate change.

“Climate change is an issue that the entire world will need to face,” Kayyali said. “Supporting projects from universities and developing countries will benefit everyone from everywhere.”

This story was updated on April 22, 2019 to include original statements from Dr. Mohamed Kayyali, chairman of the KSF Space Foundation. It was updated again on April 26 to include information provided by Dr. Ouazzani Jamil Mohammed, the dean of the faculty of engineering sciences at the Private University of Fez. 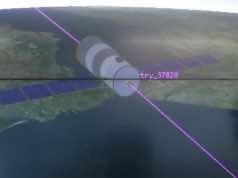