After an agreement with the Ministry of Education failed, contractual teachers have organized a three-day protest in Rabat and are threatening a “blank year," 12 months without work.

By
Anton L. Delgado
-
Anton interned with Morocco World News as a news correspondent and staff photographer from March to May 2019.
Apr 23, 2019
Spread the love

Rabat – Thousands of contractual teachers from the 12 regions of Morocco marched through Rabat in the first three-day protest since the collapse of an agreement with the government.

A meeting between the major teacher unions and the Ministry of National Education, Vocational Training, Higher Education, and Scientific Research was scheduled for Tuesday, April 23. But following accusations from both sides that the other had violated their April 13 agreement, the meeting was canceled.

Minister of Education Said Amzazi, just 10 days earlier, had announced an agreement had been reached and the end of the months-long protest was at hand.

In contradiction to Amzazi’s claims, protestors promised to continue protesting this week.

On Tuesday, contractual teachers attempted to gather at the 16th November Square in Rabat to host a rally before the march began, but were prevented by riot police. Three teachers, not visibly injured, told Morocco World News (MWN) that several policemen excessively used their batons to keep teachers out of the square.

Teachers’ unions have not released a statement regarding the alleged incident, and no injuries have been reported.

Contractual teachers usually march from the Hassan Quarter down Hassan II Avenue to the Parliament. During one other occasion, protestors attempted to host a rally at the 16th November Square, but were prevented by police on April 8.

Riot police at the march and representatives from the National Security Headquarters declined to comment on the incident to MWN.

Marching instead of meeting

The sun was blotted out in Rabat by a sea of umbrellas held by the teachers, who were all following trucks bedecked with speakers and the most enthusiastic protestors.

Chants of “We’ll be here till integration” and “Our fight continues, we won’t give up” were amplified through the speaker systems and echoed down Hassan II Avenue.

At the end of the chant “Don’t make us do this for a year, Amzazi,” smoke began to billow from a decrepit-looking speaker attached to one of the trucks of the Coordination of Teachers Forced into Contracts (CNPCC).

“Even the equipment is tired of having to keep protesting against the ministry,” Khalid Bourhda, deputy coordinator of the CNPCC’s Rabat district, told MWN, as he waved away some of the smoke.

The 40-year-old, who teaches Arabic at an elementary school in the city, played a key role in coordinating the national marches in Morocco’s capital city.

“Each one of the national protests is even more of a success because the number of teachers attending keeps growing,” Bourhda said. “More and more teachers are inspired to join our fight for stable employment and basic dignity.”

As the deputy coordinator, Bourhda sits in on all of the local CNPCC Rabat meetings and then spreads the information and details about marches through social media platforms such as WhatsApp and Facebook.

The truck, supporting a still smoking speaker, stalled in front of Bab Chellah, roughly a kilometer from its destination—the Parliament building.

Bourhda laughed and, along with half-dozen fellow teachers, began pushing the truck forward.

“See what I mean, everything is tired of marching,” Bourhda said.

Both sides have taken to blaming each other for the collapse of the April 13 agreement.

During the morning of Tuesday, April 23, the ministry released a statement saying that it had “suspended the meeting… with the coordinations that most represent of teachers.”

The ministry stated the decision had been made to cancel the talks after the teacher unions “breached the obligations” they had agreed to by not returning to work by Monday, April 15.

The ministry stated that it would “resume dialogue on the condition that teachers return to work.” 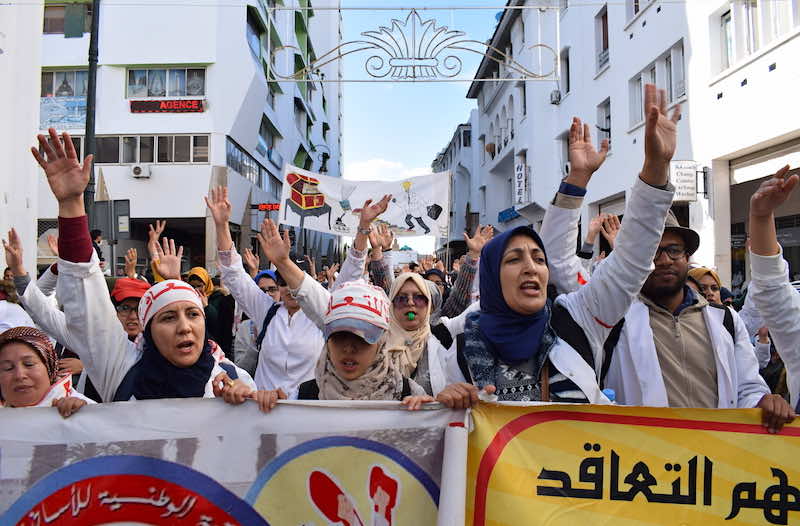 In response, teachers’ groups released a statement claiming that the ministry had been the first to breach obligations by continuing to pursue legal action against the protesting contractual teachers. The unions then threatened a blank year, a full 12 months of not reporting to work, if the ministry continued to fight their demands.

“The first round of discussions with the ministry was a complete failure,” Zakaria Elkoti, a member of the national CNPCC, told MWN. “The agreement they proposed wasn’t what we wanted because they did not promise integration. That’s why we decided to launch this week’s protests.”

As a member of the CNPCC’s Supervising and Follow-Up Committee, Elkoti has been present during the discussions with the ministry and is not surprised with the April 13 agreement.

“If they aren’t giving us what we are demanding, then of course we aren’t going to go back,” Elkoti said. “We can’t say yet if a blank year is going to become necessary, but none of us want to do it. If the ministry helped us find a solution today, we will go back tomorrow.”

Since 2016, the ministry has been hiring teachers through regional academies under annually renewable contracts to fill the education system’s need for more teachers.

Those hired in this manner are known as “contractual teachers.”

The contractual teachers receive the same salary, starting at MAD 5,000 ($520) a month, as teachers in the public sector permanently on the government payroll. But their annual contracts include a reduced pension and lead to less job security—the two main reasons many have been protesting.

As the protests and strikes have gone on since February 20 and the talks with the ministry have continued to fail, many teacher unions are also demanding that the ministry does not take legal action to fire or suspend the monthly salaries of striking contractual teachers.

Representatives from the Ministry of Education declined to comment to MWN.