Rabat – The Moroccan Public Ministry, in partnership with UN Women, launched in Rabat an awareness-raising campaign on human trafficking in Morocco on Monday.

The campaign includes two short animated videos explaining human trafficking for social media; a 26-minute documentary to be shown on 2M and National Society of Radio and Television (SNRT), the two main Moroccan television channels; and a short radio broadcast.

The head of Public Prosecutions, Mohamed Abdennabaoui, stated on Monday that the fight against human trafficking remains a central preoccupation of the Morocan justice system and that the law “provided an effective framework to prevent traffickers and to guarantee legal protection for the victims.” Abdennabaoui is also the president of the Public Ministry.

At the time of the study, human trafficking was not part of the Moroccan legislative framework, though other legal provisions such as “intentional violence” and “kidnapping” were used to prosecute cases. 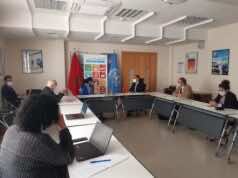