The armed students forced the scholar to leave the university.

Rabat – Students barred Ahmed Raissouni, the president of the International Union of Muslim Scholars (IUMS) from chairing a lecture on Wednesday at the Faculty of Human Sciences at Abdelmalek Saadi University in Martil, near the northern Moroccan city of Tetouan.

The lecture, organized by the Student Renewal movement, “Attajdid Attolabi,” was interrupted 23 minutes after it began under the theme “Moroccan choices in religiosity and doctrine.”

The students, carrying knives, attacked Raissouni and forced him to leave the symposium.

Student Renewal shared a statement on Wednesday to condemn the attack.

“We were surprised by a terrorist attack, in which knives were used and chairs by a faction called Al Kaidhiyin students,” wrote the movement.

The statement added that some members of the movement received injuries. The movement described the attack as a criminal and flagrant attack which harmed “the value of science and diversity at the Moroccan university.”

The movement said that it has filed complaints with the security forces in Martil.

Raissouni has not commented on the incident yet but has shared several posts on his Facebook from Moroccan news outlets condemning the attacks on him.

Raissouni is one of the most renowned scholars in Morocco.

In November 2018, the International Union of Muslim Scholars elected the scholar as its president.

The scholar, who previously served as vice president of IUMS, was born in 1953 in the village of Awlad Sultan in Larache, northern Morocco.

Raissouni earned his bachelor’s degree in Islamic law at Al Quaraouiyine University in Fez in 1978.

He also served on the executive board of the World Forum of Muslim Scholars and as secretary general of the Association of Graduates of Islamic Studies. Raissouni also holds a master’s degree from Mohammed V University in Rabat from 1989 and a Ph.D. degree from 1992. 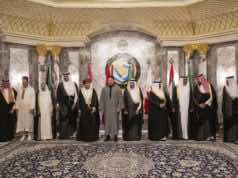 Morocco’s Neutrality in Gulf Crisis is ‘Wise and Rational’: Scholar