Moroccan women are posting photos wearing the traditional “hayek” and raising questions on what “tradition” means. 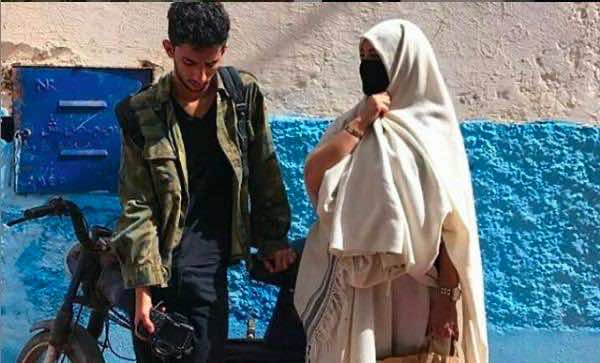 Rabat – A social media movement has invited Moroccan women to upload photos of them wearing traditional clothes like the “hayek” in their daily lives.

The “hayek” is a large rectangular fabric that women wrap around their body and over their head. Worn across North Africa, in Morocco it is often associated with the small coastal town of Essaouira, where traditionally women would wrap themselves in the long white fabric as a common daily outfit.

In recent times, the hayek is a rare sight, replaced by Western or Middle Eastern clothing or the popular Moroccan djellaba.

The movement “#Moroccan_Hayek” prompts people to think about tradition in the modern world. Some photos on Instagram show a woman in a hayek, wearing sneakers and carrying a McDonalds bag. In another photo, a women wrapped in the white cloth takes a selfie.

Some of the photos have sparked debate. Tafanoun, a media company which makes videos to share “human positivity,” removed their hayek photos after they caused “noise.” While the photos are no longer available online, it appears they were removed for being risque.

Over a hundred people commented on the removal, expressing confusion and anger.

“The photos were beautiful and in no way pornographic,” said one user.

“It’s Moroccan culture and it belongs to no-one who can judge you and take it away from you. Support your artwork and don’t let taboos and hatred take over,” another said.

Women’s clothing regularly prompts debates on rights and freedoms. In 2015, two Moroccan women were arrested in Inezgane in the south of Morocco after market-goers found their skirts inappropriate. Their trial and acquittal made headlines.