The Saudi ambassador’s visit to the DGSN is part of a series of meetings with Moroccan officials to mend fences amid deteriorating diplomatic ties. 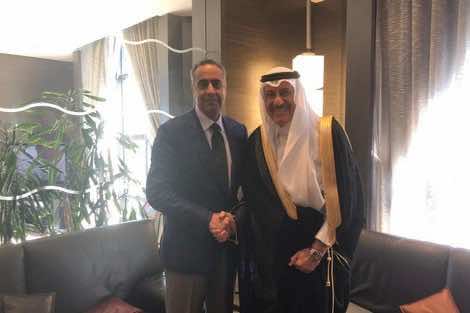 Hammouchi and Al-Ghurairi explored ways of enhancing the relations between the Morocco and Saudi Arabia, particularly in security related areas.

Ambassador Al-Ghurairi’s meeting with Hammouchi is part of a series of meetings the ambassador recently had with Moroccan officials, starting with a visit to the Moroccan Speaker of the House of Representatives, Habib al-Maliki, last Monday.

Al-Ghurairi’s visits come in the context of alleviating a simmering diplomatic crisis between the two kingdoms due to disagreements on various regional issues.

The relations between the two allies deteriorated in the past two years because of disagreement on an array of regional issues as the Western Sahara , the Saudi coalition in Yemen, and the blockade against Qatar.

In his meeting with the Speaker of the Moroccan House of Representatives, the Saudi ambassador stressed “the strength of fraternal relations which bring together the two countries and their people.”

Al-Ghurairi also said that the Kingdom of Saudi Arabia “always stands with the territorial integrity of the Kingdom of Morocco and considers it a “red line” and one of the tenets of its foreign policy.”

President of the House of Councilors, Hakim Benchamach, the Minister of Foreign Affairs and International Cooperation, Ahmed Taoufiq, and the Minister of Justice, Mohamed Aujjar, were all among the Moroccan officials that the Saudi ambassador met to enhance the Saudi-Moroccan relations.