Secretary General of the Minister of Economy and Finance accused Moroccan doctors of underreporting taxes.

Rabat – Doctors at Moroccan private hospitals have hit back at Zouhair Chorfi’s criticism of greed and fiscal cheating.

Chorfi, who serves as the secretary general of Morocco’s Ministry of Finance and Economy, recently accused Morocco’s private health sector of a “major underreporting” of their taxable income.

Speaking at the recent national conference on taxation on May 4, Chorfi said that doctors in the private sector under report up to 90% of their income.

According to Chorfi, the average under-reported taxable income in other sectors stand at 20%. This, he argued, makes private actors a major negative influence on the health of the Moroccan economy.

In response, however, doctors have berated Chorfi for being biased and “irresponsible” in his assessment of the country’s financial situation.

In a tellingly scathing press release, representatives of private doctors said they were filing a formal complaint against Chorfi for his “sensational and irresponsible” May 4 decorations.

In the release, the National Association of Private Clinics (ANCP), strongly retaliating against Chorfi’s accusation, said “it was a pity” that a high-profile public servant could “solemnly accuse doctors” while indirectly underreporting other sectors’ tax cheating.

In addition to suing Chorfi, ANCP representatives are pressuring the president of the National Council of the Order of Physicians to use his position to act on their behalf.

The doctors are also calling on the parliament to interrogate the Minister of Finance, emphasizing that Chorfi should not be allowed to get away with the charges doctors are levying against him.

Why are doctors under fire?

The doctors are not the only demographic who have been targeted by the finance ministry.

Government Spokesperson Mustapha El Khalfi recently pointed out that independently-employed Moroccans are “less likely to comply with income taxes.” Companies, meanwhile, were said to report only 33% of their earnings.

In light of this additional accusation, it appears that Morocco’s private doctors may be getting much of the blame for Spokesperson El Khalfi’s declaration that “80% of the Value Added Tax (VAT) is paid by only 1.6% of taxpayers.”

The matter of many Moroccans not complying with tax laws is one of the reasons doctors may feel that they are singled out. Another is that Morocco’s doctors hold a reputation of racking up unnecessary bills by charging patients for procedures they did not need.

The National Fund of Social Welfare Organizations (CNOPS) caught on to the growing tendency for doctors to choose c-sections over vaginal births for baby deliveries, costing patients approximately MAD 8000 per delivery. In four years, between 2013 and 2017, the number of c-sections rose from 35 % to 61 %.

The operations, regardless of their drastic increase, were being reimbursed by CNOPS faster than natural births. On April 17, however, CNOPS announced that both procedures would be reimbursed at the same rate.

Doctors then refused to accept the refund, which means mothers having a c-section birth must pay upfront.

Such a request from private doctors may lead to suggestions that monetary gain, rather than patients’ health, is the priority for private hospitals. This reputation of greed makes Chorfi’s accusation seem more plausible for many Moroccans.

In February 2018, Moroccan Francophone outlet Telquel ran a piece in which it lambasted private hospitals for building businesses more interested in accumulating economic benefits than in attending to patients’ needs.

“For many doctors in the private sector, patients have become a cash cow. Treating people is no longer a calling, but a juicy business,” Telquel wrote. Moroccan private hospitals, the piece trenchantly added, thrive on “immoral and illegal practices.”

Chorfi’s May 4 remarks come amid a growing impetus for a radical change in Morocco’s taxation system.

At the national conference on taxation, the government and business representatives overwhelmingly agreed that Morocco needs radical changes to meet the challenges it faces and achieve its development goals. 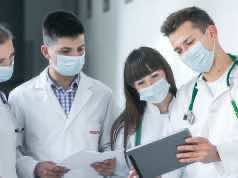