When they were in high school, Oubeid Allah Hlal and Amine Belghazi never imagined that their dream of performing in the US, especially in Los Angeles, would ever come true.

Prior to coming to the US, Les Inqualifiables performed in Canada, where they met Simo Squalli, CEO of Agence Qenza, the co-producer of their North American tour.

The two comedians performed for the Moroccan-American community in cities like Cleveland, Chicago, Atlanta, Orlando, Houston, San Diego, and Los Angeles, as well as in states like Virginia and New York.

“These two comedians are hilarious and I had a great and memorable time watching them. It was worth every penny and worth the two-hour drive. I cannot wait to see them again and I highly recommend them to all my Moroccan friends,” said Imane Sabahhi, who is an American of Moroccan descent.

When they are not cracking jokes, the two comedians continue to work. Oubeid Allah Hlal is a resident physician of cardiology, practicing medicine, while Amine Belghazi, who holds a Masters degree in marketing management, manages the comedy team’s tours and production.

“Les Inqualifiables” is the product of their long friendship, which began in high school. When they started performing five years ago in their hometown of Rabat, the two comedians never imagined that their dream of performing in the US, especially in Los Angeles, would ever come true.

“Amine and I were together driving in the car after our very first show. We said to each other that we really need to go to the USA. We need to go perform there. At that time, it seemed far…very far away,” Hlal recalled in an interview with MWN.

Since those early days, the artists have developed their skills in different comedy genres like stand up, sketch, improvisational and anecdotal amongst others. They also collaborate with other Moroccans and invited guests of honor. Both Fehd Benchemsi and Mourad Zaoui were featured in the Los Angeles show.

“Les Inqualifiables” can be seen at the 5th Annual Ramadan Festival ‘Aji T’hdm’ (Come Digest). The two comedians will perform on Friday, May 17, 2019, at the Mohammed V Theater, Rabat. 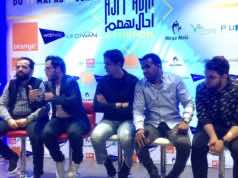 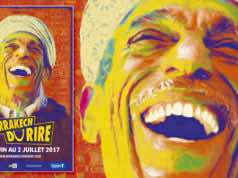