“We can no longer withdraw into silence and let this person get away with all this as if nothing happened.”

Rabat – Herve Margot, the headmaster of the Victor Hugo high school in Marrakech has been suspended after a former student spoke up about sexual misconduct, asking that the headmaster be held accountable for the “damages” he has caused in the “lives of young women.”

The principal accuser, who has not yet been named in reports, is a former student at the school, which is one of Morocco’s many selective and reputed French high schools.

p style=”text-align: justify;”>In a lengthy, MeToo-inspired “message” that began circulating online on Wednesday, May 15, Magot’s accuser spoke out against the culture of “silence” and “impunity” that have emboldened the headmaster to continue what the text describes as years and years of inconsiderate and inappropriate conduct with female students and colleagues.

“If you’re wondering why you are you receiving this message,” the text started off with a blasé rhetorical question, “well, it is simply because silence is no longer an option.”

The text continued: “Many of you may have no idea what I am about to tell you. Some will simply not care and so will make fun of it. But others will relate. So many people have suffered, mainly young women: both teachers and students. Today I say no.”

The “message” went on to provide a list of charges for which the headmaster should be held accountable. The litany of accusations levelled at Headmaster Magot includes “wandering hands,” “sexual allusions,” and “misplaced questions and remarks.”

The text noted that the headmaster’s “wandering hands” have for far too long got away with uncomfortable touchiness, including “always touching you high on the chest or the bottom of your breasts.” The accuser argued that her decision to come out was motivated by a desire to finally break from the cycle of silence and guilty indifference, to finally “say no.”

“I say no to inaction. No to silence. No to half-measures…. I refuse to remain silent and tolerate such unacceptable deeds and gestures.”

Most critical perhaps, Magot’s accuser hinted at the potential power of coming out: convincing others who have had similar uncomfortable experiences to feel emboldened and strong enough to denounce their abuser.

“Because many of us have suffered the same fate, we have a voice and we do matter. Justice must be done. We can no longer withdraw into silence and let this person get away with all this as if nothing happened.”

As a result of the accusations, Magot has been suspended from his post pending investigations and “dialogue” between students, parents, and the school board to determine what happened, the Agency for French Education Abroad (AEFE) announced in a statement as the unsigned message went viral.

The statement also came as a response to a two-day strike that students at the school staged on May 15-16. Taking the side of Magot’s accuser, protesting students asked that the headmaster “responds for his actions.”

According to a statement from the Marrakech Student’s Parents Union (UCPE), the French embassy’s cultural adviser is scheduled to travel to Marrakech on Friday to shed further light on the issue. 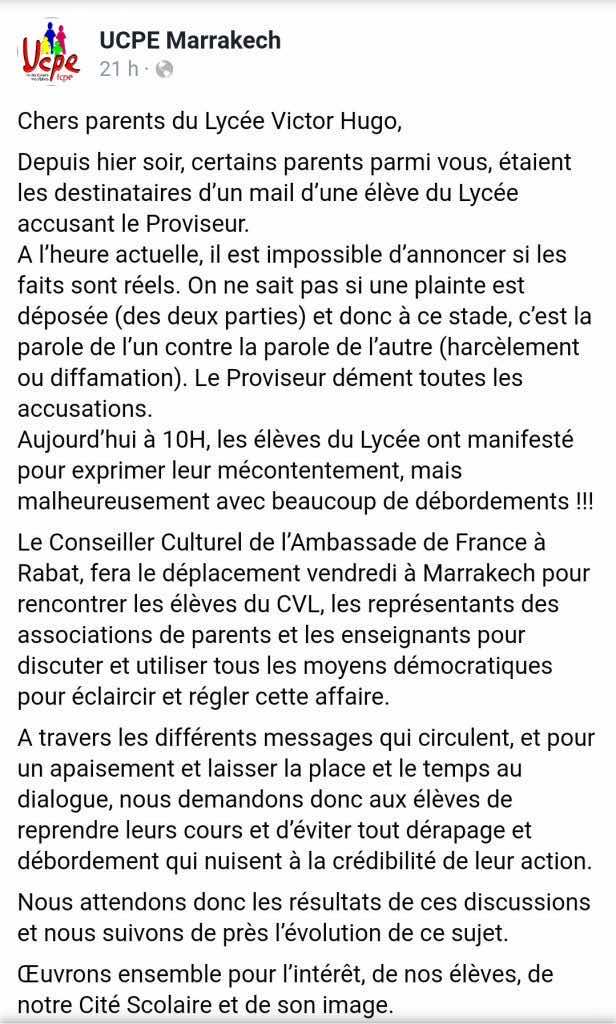 The French embassy’s envoy is set to meet with students’ representatives, parent associations, and the school board to “discuss and use all democratic means to clarify and solve this issue,” UCPE’s statement noted.

The headmaster has so far denied all the accusations.