Two Moroccan players have won awards for their astonishing performances during the 2018-2019 season with Ajax, Amsterdam. 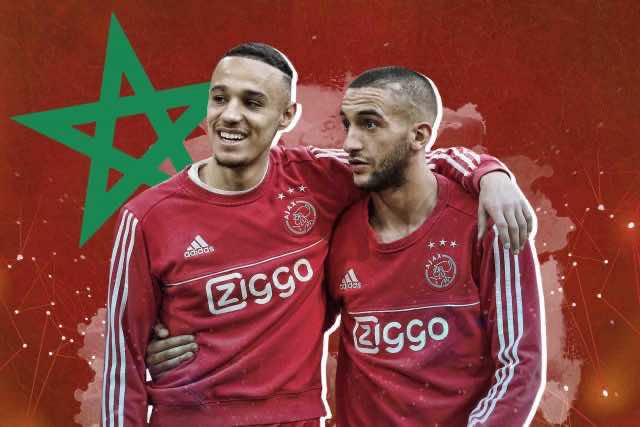 Rabat – Moroccan international players Hakim Ziyech and Noussair Mazraoui have won awards for their hard work while playing for Amsterdam’s Ajax this season.

The Dutch football club named Morocco’s key footballer Ziyech as its Player of the Year, while Noussair Mazraoui scooped the Talent of the Year Award.

Head coach at Ajax, Erik ten Hag, announced the big news on Thursday during the season’s closing ceremony held in Amsterdam yesterday, May 17.

The ceremony was attended by thousands of fans.  Ziyech has been inspiring his fans with his professional performances during Ajax games during the UEFA Champions League.

In April 2018, Ziyech clinched the title of the player of the year of his Dutch team after he led them to a major win against AZ Alkmaar.

Ziyech, however, hinted that he might stay with his current football club, leaving room for speculation about his future. In April the footballer said that he is“ always very picky” in response to offers he receives from football clubs.

“Anything is possible. There must be a club that I want to trade in for Ajax. That doesn’t just happen,” he added.

Ziyech joined Ajax in 2017. Ziyech also played in many games for Morocco’s national football team, including during the 2018 World Cup.

Mazroui has just renewed his contract with the Dutch football club in April. The club extended the footballer’s contract until 2022.

The midfielder’s previous contract extended until 2021.

Mazraoui, who had the option to play for the Netherlands’ national team, decided to represent Morocco with the Atlas Lions instead.

Both footballers are expected to participate in the 2019 African Cup of Nations with Morocco’s Atlas Lions.

Thanks to their impressive skills, both footballers are have a brilliant future ahead of them, either with their Dutch club or another team, if they decide move..