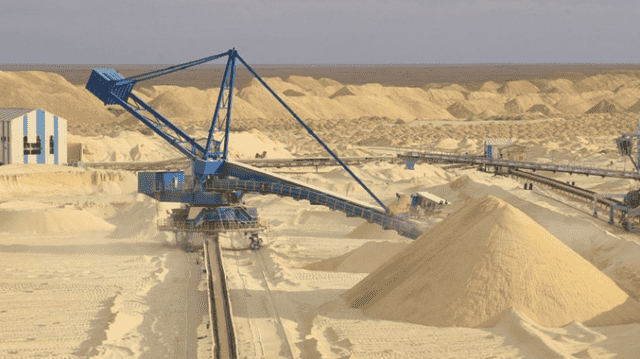 Rabat – Algeria’s dream of becoming a global leader in the phosphate market has been halted by the ongoing political headwinds facing the country’s political and business establishment.

The Eastern phosphate cluster in the Tebassa region was projected to boost Algeria’s phosphate industry’s competitiveness in global and continental markets. According to latest developments, however, the project is on the brink of demise.

Since the start of the ongoing anti-government fever, the project has seen succession of failures that have decidedly cooled investors’ enthusiasm.

According to reports, interminable delays in the completion of facilities have raised questions about the effectiveness and use of the mega-project.

On May 16, government-owned Algerian Energy Company (AEC) announced that no candidates have so far responded to the call for tenders which the Algerian government launched to attract foreign investors to the project’s construction phase.

The lack of bidders to join the efforts of the Algerian government means that neither the fertilizer plant in Annaba, a seaport city in Northern Algeria, nor the desalination plant in Guerbes will be completed on schedule, AEC stated. It is even possible, AEC’s announcement ruefully conceded, that the project will not continue to completion.

In addition to producing enough quality fertilizers for domestic farmers and providing employment opportunities to youth in the areas close to the plants, Algeria hoped to “compete with Morocco” in the global and continental phosphate markets.

A $10 billion investment, the mega-project was expected to catapult Algeria among the world’s top fertilizer producers. By 2022, Algeria’s annual fertilizer output would jump exponentially from the current level of 1.5 tonne to 10 tonnes.

Meanwhile, on the international trade front, the project would also make of Algiers a key player in the global market. Had the project been completed on schedule, projections for 2022 were for Algeria to export as many as 3 million tonnes of fertilizers, making the country a fierce competitor for Morocco’s OCP.

There are many reasons behind the debacle, but observers point to the country’s current political situation as one important factor. While it is not clear whether all projections would have materialized as planned had the anti-government protests not erupted, the project’s general frame would not have been affected as it now is.

Former Prime Minister Ahmed Ouyahia is known to be one of the project’s most important sponsors. The Kouninef brothers (Reda, Karim, and Tarik), three of Algeria’s most powerful businessmen, are also considered to be the project’s godfathers.

With the Kouninef brothers now in jail and Ouyahia sidelined from political power following the resignation of President Bouteflika, the mega-project’s chances of success are anything but certain.

In a country where political and financial powers were personalized for decades under Bouteflika, it comes as little surprise that the symbolic demise of the project’s foremost sponsors would mean complete failure or at least a considerable setback.

According to Francophone outlet Maghreb Confidentiel, Algeria’s mega-project was initially greeted with enthusiasm by the global business world.

Construction and engineering giants like China’s CITIC had shown keen interest in the construction of the phosphate facilities. However, since the arrest of establishment politicians and businessmen who were the company’s main mouth-pieces in Algeria, enthusiasm for the company has waned considerably.

Meanwhile, as the promise of Algerian phosphate project sinks, Morocco’s OCP continues to multiply successes, expand its global reach, and cement a working relationship with a number of governments across Africa. The company recently announced an overall increase in its revenues for the first quarter of 2019.

On the African continent, the Moroccan giant is increasingly—and on many levels successfully—branding itself as an indispensable ingredient in Africa’s bid to attain food security and sustainable development.