The protesters have been threatening to boycott the July 4 election. 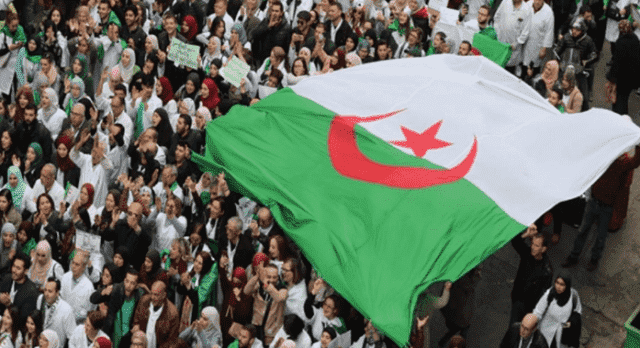 Rabat – Thousands of protesters  in Algeria gathered again after Friday prayers, renewing their determination to stand against the interim government.

This Friday marked the 14 week of protests, with demonstrators repeating their calls for radical change and the resignation of all the surviving elites from the era of former President Abdelaziz Bouteflika.

With the same slogans as in the previous weeks, the protesters carried banners and Algerian flags, opposing the July 4 election, which Interim President Abdelkader Bensalah announced in April.

This week was marked   by massive security crackdown. Fearing that it may lose control of an already alarming situation, the government has lately been deploying hundreds of police officers  to “supervise” the demonstrations.

“The FFS strongly dencounces the systematic repression and violence used this morning by those in power against protesters and those who want to rally [in] the capital to march peacefully.”

The party demanded  that arrested individuals be released immediately.

“Holding a presidential election could help [Algeria] avoid falling into the trap of a constitutional void, with its accompanying dangers and unwelcome consequences,” Gaid Salah said on Monday.