Moroccan soccer fans were shocked last night by the injustice the referee inflicted on Wydad of Casablanca during the first leg of Africa’s Champions League Final in Rabat. 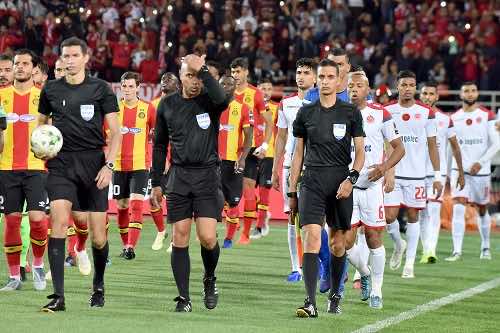 Rabat – Millions of Moroccans watched with a sense of powerlessness as the referee’s decision influenced the course of the match in favor of Espérance of Tunis.

This injustice should have caused an uproar throughout Morocco and pushed Moroccan media to denounce the referee’s clear bias in favor of the Tunisian team.

Unfortunately, Morocco does not have an influential press that can put pressure on rivals when the country’s interests are at stake. When Tunisia’s SC Sfaxien lost the second leg of the African Confederation Cup against Morocco’s Renaissance Sportive of Berkane earlier this month, the Tunisian press unified to denounce the alleged injustice their team suffered at the hands of the referee.

Although Senegalese Referee Maguette Ndiaye did not wrong the Tunisian team, both the Tunisian press and the Tunisian Football Federation launched an aggressive campaign against him as well as the Confederation of African Football (CAF), accusing them of bias in favor of the Moroccan team. More still, the president of Tunisia’s football federation traveled to CAF’s headquarters in Cairo and made the case for his country’s team before CAF’s disciplinary committee.

This unprofessional behavior should have been enough evidence for CAF to impose heavy sanctions on the Tunisian team. Against all odds, CAF showed inexplicable leniency towards SC Sfaxien and its players. Africa’s football governing body imposed a mere $40,000 fine on the Tunisian club, banned three players from playing three to four matches, and banned two technical staff members for five matches.

After the scandalous injustice to which Morocco’s Wydad of Casablanca (WAC) was subjected in the Champions’ League final in Rabat, one might argue that the Tunisians outsmarted the Moroccans. Their campaign was meant to influence CAF’s decisions in the then-upcoming final of the Champions League.

This fierce media campaign was undoubtedly present in the mind of the Egyptian referee who deprived Morocco’s WAC of a legitimate goal and a penalty.

After yesterday’s match, sports observers, as well as a number of former international referees, agreed that the referee favored Espérance of Tunis to the detriment of WAC. Former Syrian international referee and current analyst at beIN Sports, Jamal Charif, clearly said that the goal denied to WAC was legitimate.

The campaign has even affected CAF’s decisions in appointing the referees of the African Confederation Cup and the Champions’ League Finals. In an unprecedented move, almost the same referees will officiate the four matches either from the pitch or from the Video Assistant Referee (VAR) room.

The Moroccan press and the Royal Moroccan Football Federation should have denounced this move and mobilized their clout to urge CAF executive committee to reconsider its decision. Instead, Moroccans preferred to look elsewhere and did nothing to prevent others from sabotaging Moroccan teams’ chance to win the finals.

After yesterday’s incident at Prince Moulay Abdallah Stadium, one can only wonder where the Moroccan press is. Is it hibernating and waiting for others to defend the Moroccan teams? Why have the Moroccan media not followed in the footsteps of the Tunisian press and launched a similarly fierce media campaign against the Egyptian referee? Why has the President of the Royal Moroccan Football Federation, who is a member of the CAF executive committee, remained silent after last night’s event?

What happened to WAC yesterday may happen again to RS of Berkane in tomorrow’s second leg of the African Confederation Cup Final in Alexandria. It may happen in the second leg of the Champions’ League final next Friday in Tunis, or befall the Moroccan team in the African Cup of Nations next June. Why have the media failed to launch a campaign to denounce the Egyptian referee and pressure CAF to ensure that such a scenario will not happen again?

Despite the existence of dozens of Moroccan newspapers and hundreds of news websites, it is clear that there is no committed press interested in defending the interests of the country. Most news outlets focus more on publishing trivial, sensational subjects that will bring the greatest number of readers or viewers.

Until Morocco has a strong, committed, and influential press that unifies when the country’s interests are at stake, we may continue to witness episodes such as the one we saw last night against WAC. It is up to Moroccan press to ensure that neither CAF nor any other football governing body will ever disregard the grievances of Moroccan teams and their fans.