Morocco and South Africa have had frosty relations due to opposing views on the Western Sahara conflict. 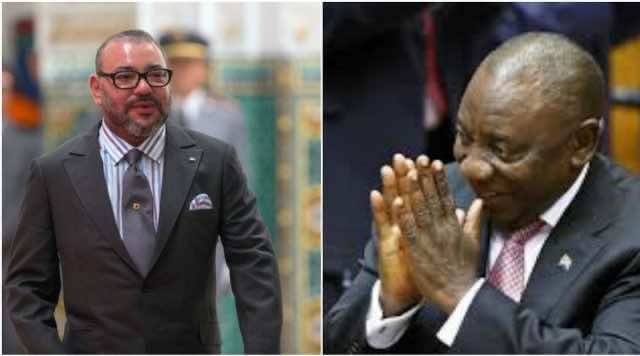 Rabat – King Mohammed VI addressed a message to President Cyril Ramaphosa on his inauguration as President of the Republic of South Africa on Saturday.

In the message, the King expressed his “sincere congratulations to the South African President, wishing him every success in his mission to serve the interests of his people and to realize his aspirations for further progress and prosperity.”

The message from the King comes amid decades of tense interactions with Pretoria due its position on the Western Sahara conflict.

South Africa has long supported the separatist group of Polisario, vowing to back its “independence claim” at the African and international level.

The strained relationship between the two countries dates back to 2004 when Morocco recalled its ambassador to South Africa when Pretoria recognized the self-proclaimed Sahrawi Arab Democratic Republic (SADR).

Ever since, Pretoria has been doing its utmost to oppose Morocco during international symposiums and events, including the UN Security Council.

Read Also: Moroccan FM Calls on South Africa to Work With Morocco for a Stronger Africa

In April, South Africa abstained from voting on Resolution 2486, which extended the mandate of MINURSO in Western Sahara for six months.

South African representative to the UN Jerry Matjila said after the vote: “This is again an example of an African issue being decided by those that are not from the continent.”

In addition to its position on the resolution, Pretoria hosted a symposium to generate opposing voices against Morocco’s territorial integrity in March.

Algeria, Polisario’s first supporter, was among the first attendees at the SADC Solidarity Conference with the Sahrawi People in Pretoria, meeting March 25-26. Namibia co-hosted the conference against Morocco’s interests.

Algeria, South Africa, and Namibia, against Morocco’s sovereignty over the region, have long held links with the separatist group of the Polisario Front, supporting their independence claims.

Despite the hostile moves, Morocco’s diplomacy has always relied on reinforcing a win-win diplomatic cooperation based on respect for states’ sovereignty, and the principle of non-interference in domestic affairs.

Furthermore, Morocco has categorically refused to interfere or comment on the Bouteflika crisis. Morocco has also proposed a dialogue initiative to Algeria to break the stalemate, a call which has not yet received an answer.