The Gnaoua World Music Festival, nicknamed “Africa’s Woodstock,” is returning for the 22nd time from June 20 to 23. 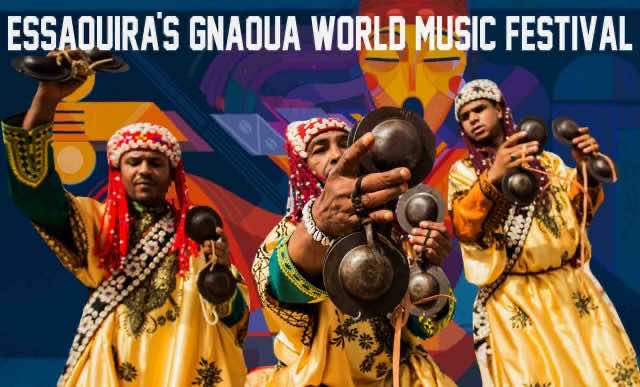 The festival will gather renowned Moroccan artists as well as big names on the international scene, including both modern and traditional acts.

This year, the festival invites attendees to “travel through the universal language,” said the organizers in a statement. The statement also added that this year offers a real mixing pot of music, from Cuban, Tuareg, Tamil, to jazz, flamenco, and reggae performances.

The organizers emphasized that youth is at the heart of the festival and that they made sure the younger generations were represented, with 23-year-old Maalem Houssam Gania, the son of legendary Moroccan Maalem Mahmoud Gania set to perform. “The rising star of Africa,” Guinean singer Moh Koyate is also on the lineup.

The Dar Loubane stage will house more intimate concerts and acoustic fusions, like that of singer Alikane and his troupe Tyun Gnaoua with, drummer, Karim Ziad, and percussionist, Rhani Krija. The stage will also see flamenco and tagnaouite with Jorge Pardo and Said Oughassal.

The festival plans to host a human rights forum, in the theme of “the power of culture against the culture of violence,” to discuss ideas for a “better world from men and women from all walks of life” the statement said.

Every year, the festival sees up to 500,000 people attend from across the globe to view the performances of Moroccan, African, and international artists and to celebrate the music of the Gnaoua brotherhood on Morocco’s Atlantic coast.