Moroccan and Palestinian officials came together, Saturday 25 May, in Ramallah to share iftar. 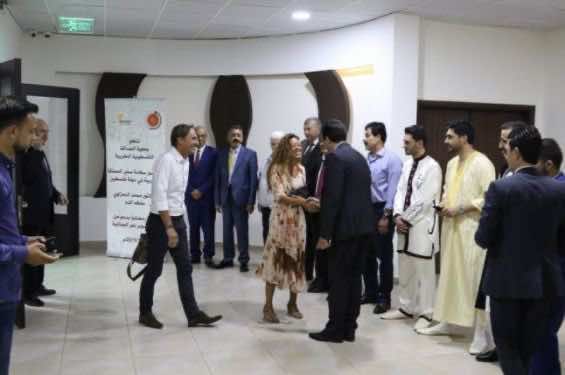 Rabat – Moroccan and Palestinian officials met on Saturday in Ramallah, Palestine to observe Ramadan with a breakfast organized by the Moroccan-Palestinian Friendship Society in Ramallah, with the support of the Super-Nimr Industrial Society in Hebron.

The event brought together guests such as Moroccan Ambassador to Palestine Mohamed Hamzaoui and Tunisian Ambassador Habib Ben Farah.

Representatives of the diplomatic corps in Jerusalem and ambassadors from Palestine, the president of the Constitutional Court, Moroccan judges, and lawyers, as well as youth from the Moroccan community in Jerusalem and the West Bank cities also attended the iftar.

The president of the Morocco in Palestine Association, Mohamed Ziad Al-Jaabari, said in a speech that the gathering strengthens the brotherhood between the two countries.

President Ziad Al-Jaabari also said that the meal allowed Moroccans living in Palestine to experience the atmosphere of the holy month through Morocco’s friendship with Palestine.Mr. Mohamed Ziad Al-Jaabari thanked His Majesty King Mohammed VI and members of the Society for Israeli-Palestinian Friendship. He also touched on the achievements and the constitutional and institutional reforms Morocco has made.

President Ziad Al-Jaabari also thanked the head of state and the Palestinian leaders, as well as all Moroccans and Palestinians.