Tasked with solving the American Middle East Peace Plan, Jared Kushner arrived in Morocco on Tuesday along with with US officials Jason Greenblatt and Brian Hook.

The visit is part  of Kushner’s tour in preparation for Washington’s upcoming economic conference scheduled for June 25-26 in Manama, Bahrain. The conference aims to encourage investment in  Palestine.

Trump’s administration seeks to garner support for the US efforts to broker peace between Israel and Palestine.

Jared Kushner will also visit Jordan and Israel after his visit to Morocco.

Last week, Palestinian authorities condemned the decision of the US-led economic symposium in Bahrain, emphasizing that it was not  consulted during the planning process of the conference.

The Palestinian Authority also decided to boycott the conference, emphasizing that the plan aims to  force Palestinians to “sell” their country.

Nabil Shaath, adviser to the Palestinian president Mahmoud Abbas said last week: “We will inform Bahrain that we will not take part in such a conference.”

He added, “We will not sell our country based on an economic project.”

The Palestinian government also called on Arab states to  boycott the conference. Several Arab countries, especially in the Gulf have announced their support for the event, including Saudi Arabia, Qatar and the UAE. 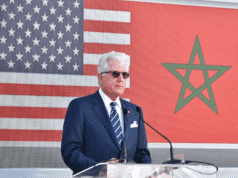