Among the Moroccan historical figures who contributed to globalization and science, and developed the way we understand philosophy and politics, is the geographer and traveler Muhammad al-Idrisi al-Qurtubi al-Hasani as-Sabti. Also known as Charif al-Idrisi, the Moroccan explorer is renowned for his relationship with the king of Sicily, Roger II. 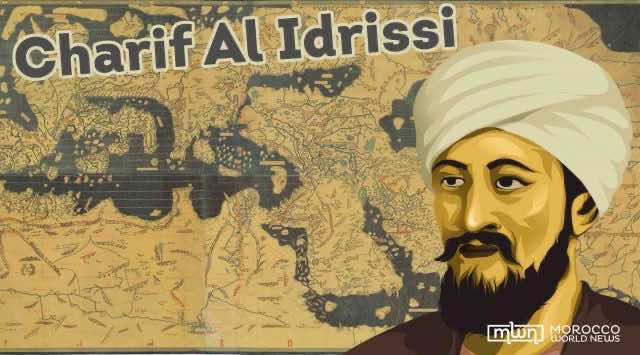 Rabat – King Roger II invited Charif al-Idrisi to his kingdom and gave him a high ranking in the kingdom’s scientific circles. He also named  Charif al-Idrisi as head of a group of scientists, scholars, historians, and geographers to establish a world map with new scientific specifications, benefiting from the experience of seasoned travelers and the knowledge of traders, sailors, and explorers.

The Moroccan geographer’s scientific and cognitive input, which span over 15 years of work, investigation, and scrutiny, key to the development of the world map which was engraved on a large silver plate and in a book called “Nuzhat al-Mushtaq Fi Khtirak Al Afaq.” (The Excursion of the One Who Yearns to Penetrate the Horizons — Library of Congress translation).

Unfortunately, while the book has survived, the engraved silver plate has been lost in unknown circumstances.

Al-Idrisi left the island of Sicily to Tunisia after the massacre of Muslims in 1161, when approximately 1165 Muslims were killed.

Have we told you something new about the renowned geographer’s life?

The historical research available on Charif al-Idrisi leads us to ask questions about the more mysterious aspects of history. Searching for the truth about the man who changed the face of geography typically prompts a deep investigation into the hidden truths of history.

How did the King of Sicily and southern Italy, Roger II, know Charif al-Idrisi? He was not a famous traveler or author of great achievement, nor was he a prominent scientist or author.

Knowing that the city of Palermo, the capital of Sicily, had a prominent scientific status across Europe and that the court of King Roger II was full of intellectuals, poets, artists, historians, and others, what was the added value of the presence of Charif al-Idrisi? Why was he given a first-rate scientific and social status? Who was more in need of the other, was it the Norman / Christian king of Sicilia or the Charif al-Idrisi Skalli, an Andalusian / Muslim? Is it necessary for us to delve deeper into the life of the great geographer and traveler; where are the significant movements and historical stages in the life of Charif al-Idrisi? Should we believe that King Roger’s passion for science, knowledge, and geography was the sole reason he opened his palace to Charif al-Idrisi?

Through further investigation, we are not questioning all historical research dating back to the 12th century. Rather, it is merely a matter of seeking to give historical context and due diligence to history by looking at the life of Charif al-Idrisi in a broader light.

We can try to solve this problem either by asking new questions or by connecting the dots to understand Charif al-Idrisi’s journey. But getting the context right requires that we first understand, and examine, the life of King Roger II.

With the presence of three popes during his reign, Roger II struggled with other Italian kings and dukes, due to his dream of uniting southern Italy and the institution of the Vatican. Finally, he was given the pope’s blessing as King of all Italy and as representative of Catholics on the Muslim Island of Sicily.

All this required a great political understanding to make Sicily a cultural hub and a crossroads for religions, peoples, and languages. It was an island where Muslims constituted more than half of the population (with a presence of more than two and a half centuries), while Jewish and Byzantine were minorities. There were few Catholics among the Island’s soldiers as well.

The wisdom of King Roger II, who was fluent in Arabic, Latin, and Greek, made him give many Muslim leaders the freedom to control their lands and their affairs, as well as making them commanders in the army. He also had the Byzantines as advisors and commanders in his armies.

On the other hand, King Roger had ambitions in the south of the Mediterranean, and so after concluding trade agreements with the Fatimid state in Egypt, he invaded Tunisia and part of Libya, Algeria, and Greece and entered into clashes with the Byzantine state in the Balkans. Historians have uncovered King Roger II’s intention to build a Norman empire on the ashes of the Roman Empire, including part of Andalusia.

King Roger II’s first wife was Elvira, daughter of the king of Caston in Spain, Alfonso VII and Isabella or Princess Zaida, who married King Alfonso after the death of her husband Mamon, the Prince of Cordoba Ben Mohammed El Moatamid, Prince of Seville. When Queen Elvira died at the age of 35, King Roger II was distraught and did not leave his house for a long time.

However, the questions must also be about Charif al-Idrisi, especially his familial ties to “Ben Hamoud” who are Idirissi Cherifians who established  “Hamudia state” in Andalusia, Gibraltar, Ceuta, and Tangier for more than 40 years after the fall of the Idrissid state in Morocco.

After many conflicts with the kings of the sects, as well as what is known in Andalusia as the vast sedition, some of them returned to Ceuta and Tangier and others to the island of Sicily.

Mohammed bin Mohammed bin Abdullah bin Idris bin Yahya bin Ali bin Mahmoud was born in Ceuta in 1099/1100 and studied in Cordoba. He moved to many countries, including Britain, Asia Minor, Constantinople, Greece and other countries of the Mediterranean and the Balkans.

But his relationship to bin Mahmoud was as important as Mohammed Abu al-Qasim al-Hammudi, governor of an area on the island of Sicily and a senior state official in the kingdom of Roger II, presented Charif al-Idrisi to King Roger II before 1138 when he traveled back from the Orient and stopped in Sicily.

It is by now clear that there were common interests between the kingdoms and peoples and al-Idrisi’s invitation to Sicily was not purely scientific but political as well. King Roger II needed to establish political and societal stability through the presence of Charif al-Idrisi along with his statesmen, especially with the presence of Muslims who were numerous in Sicily for two and a half centuries.

Charif al-Idrisi is from a family that lost power in Andalusia, which is also his wife’s family region. al-Idrisi knows the region’s geography and history.

In addition, al-Idrisi, who studied in Cordoba,  toured the east and Asia Minor, making him the best man for king Roger II’s ambitions on the political, societal, and scientific levels. He was assigned to carry out a prominent scientific project, known as “The Book of Roger.” It was a world map attached with Nouzhat Al Mouchtak book.

When King Roger II died in 1154, Charif al-Idrisi lost power inside the royal court. After the massacre of Muslims in Sicily in 1161, al-Idrisi fleed the island. Four years later, rumors said that al-Idrisi died either in Ceuta or Tunis.

We do not assert that we are telling “the truth,” but we focus on threads that may help us re-create the biography of a traveler that many regards as the greatest geographer, the founder of geography as a science. It is a biography that many historians, orientalists, and researchers have narrated very differently.

Translated from Arabic into English by Hamza Guessous