Morocco’s contribution to United Nations Peacekeeping missions has been acknowledged by Secretary-General Antonio Guterres. The service of Moroccan peacekeepers was recognized on this year’s International Day of Peacekeepers. 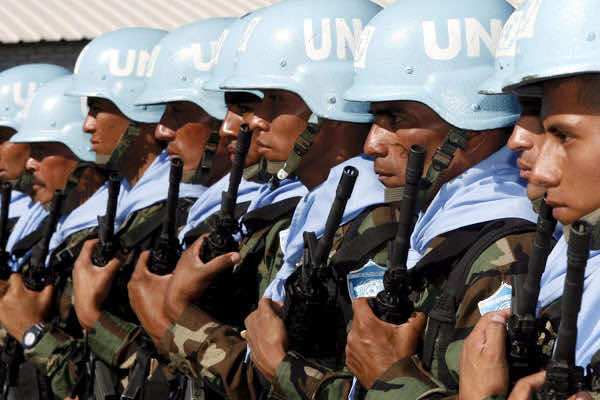 Rabat – In countries besieged by violence and cruelty, the blue helmet of United Nations Peacekeepers has, in many cases, become synonymous with a hope of safety. However, the blue helmet has also become a target for insurgent groups and militias, with dozens of peacekeepers giving their lives each year.

When violence overtakes a foreign country, the world has two choices: stand by and watch their fellow humans descend into bloodshed or risk their own citizens’ lives in service of others. Morocco’s choice has always been the latter, and the kingdom was recently honored for its commitment to United Nations Peacekeeping Operations.

On May 29, the globally recognized International Day of Peacekeepers, the United Nations paid tribute to the sacrifices of Moroccan volunteers in UN Peacekeeping Operations, many of whom gave their lives in pursuit of peace, especially in Africa.

Contributing more than 2,100 uniformed peacekeeping volunteers, Morocco ranks 13th in the world for peacekeeper contribution, and has been “an essential partner of United Nations peacekeeping operations for many years,” said UN peacekeeping spokesman Nick Birnback.

From the bullet-littered jungles of the Democratic Republic of the Congo (DRC) to the blood-stained grasslands of the Central African Republic (CAR), Moroccan volunteers with UN Peacekeeping operations have served in some of the most dangerous conflict zones in the world.

During their struggle towards bringing peace to the world, 43 Moroccan peacekeepers have lost their lives.

“We thank them for their commitment to preserving international peace and security, especially in Africa,” Birnback said.

Last Friday, International Day of Peacekeepers was commemorated with a ceremony at the UN headquarters in New York, with UN Secretary-General Antonio Guterres honoring the 119 peacekeepers slain in 2018 and 2019 with the Dag Hammarskjöld Medal, a posthumous award for UN peacekeeping forces.

Guterres also laid a wreath of flowers in tribute to more than 3,800 peacekeeping troops, police officers, and civilians whose service towards the UN has saved countless lives in conflict zones around the world.

Moroccan peacekeepers have served in some of the most hostile and dangerous regions of the world, including the DRC and CAR, two of the deadliest countries for peacekeeping forces.

In the DRC, conflict continues to smolder across the country after the Second Congo War (also known as the Great African War), which claimed over 5 million lives through fighting and its aftermath between 1998 and 2008.

Despite attempts by the Congolese government and UN intervention forces, the conflict has not yet been resolved, and thousands upon thousands continue to live under harsh conditions in the middle of a warzone.

In the CAR, a civil war has been raging since 2012 between government forces, the primarily-Islamist Séléka rebel movement, and the primarily-Christian Anti-balaka militia alliance.

Following the successful Séléka overthrow of the government, movement disbanded, but conflict continues between ex-Séléka militants and Anti-balaka forces.

The crisis has experienced some of the worst human rights violations in recent history, including lynchings and pogroms against the country’s Muslim population. Despite UN intervention in the conflict, the bloodshed continues and over a million people have been forced to flee the violence.

More than 2,000 of Morocco’s 2,100 peacekeeping volunteers are currently deployed to these two countries, where dozens of peacekeepers have already been murdered and dozens more are likely to fall as peace remains out of reach.