As Morocco will return to GMT+ on Sunday, June 9, Moroccans will need to reset their clocks once again as the North African country will go back to the Daylight Saving Time (DST). Rabat – Morocco’s Ministry of Administration and Public Service Reform has announced that the nation will return to using the GMT +1 timezone as of Sunday at 2 a.m.

Two days before the holy month of Ramadan, Morocco switched back to the Standard time.

This time change is a result of the government’s decision to switch to GMT only during Ramadan, announced Head of Government Saad Eddine El Othmani, in October 2018. The decision came after the Moroccan government adopted Decree 2.18.855 last October, adding 60 minutes to the standard time, moving the country to GMT+1 year-round.

The decree moved standard time one hour forward permanently “to avoid many changes that occur many times during the year and repercussions at many levels,”  the government explained in response to the backlash from citizens.

Before the adoption of the decree, Morocco switched the clock every summer to Daylight Saving Time, GMT+1, and returned to the old standard time, GMT wheneveras Ramadan fell in the summer.

The decision to keep the GMT+1 year around stirred confusion and generated backlash among Moroccan citizens, who called for the government to abolish the new standard time. The government, however, defended its decision, emphasizing that the time change was based on a study. The study found that the “adoption of ‘doubling timing’ has created a kind of confusion,” according to the government. 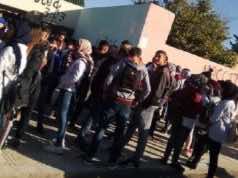