The sportsman can leave France as the authorities handed back his passport after his release.

Rabat – French authorities have released the president of the African Football Confederation (CAF), Ahmad Ahmad, after his summoning on Tuesday for corruption allegations.

French police summoned Ahmad Ahmad on Tuesday to question him for alleged misappropriation of funds and corruption involving his dealings with French company, Tactical Steel, which some speculate Ahmad has personal ties to.

Ahmad left the police office without charges and he is eligible to leave France, contrary to what has been going viral on the media.

Sports journalist, Juliet Bawuah tweeted an update on his arrest on Tuesday, saying that the sportsman was released without “any charge.”

Authorities also handed back Ahmad’s passport to him, making him eligible to travel.

The CAF president, however, is expected to attend the opening match at the Women’s World Cup before leaving France.

The news on the arrest of Ahmad shocked his fans yesterday, especially when FIFA confirmed the news in a statement.

The statement conveyed that FIFA was “unaware of the details surrounding”  Ahmad’s investigation, refusing to express its position regarding the matter.

FIFA also asked the French authorities for “any information that might be relevant to investigations taking place within its ethics committee.” The governing body added that while everyone has the right to plead innocent,  “anyone found to have committed illicit or illegal acts has no place in football.”

He has been released without any charge.

His passport has been handed to him, meaning he is free to travel.

The CAF President is expected to watch tomorrow’s opening match at the Women’s World Cup.

He will subsequently leave for Egypt ahead of the #AFCON2019 pic.twitter.com/v6CAg2fecr

The CAF president has been under pressure for several months, especially when former Egyptian secretary general of the African Confederation, Amr Fahmy submitted a file against Ahmad, accusing him of corruption.

Ahmad, however, denied all claims against him, emphasizing that the allegations are part of the attempts from former CAF officials to harm his reputation. 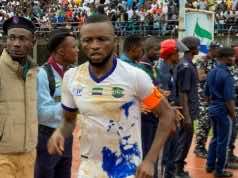