The students’ parents have also issued a statement, declaring their full support for the decision to boycott final exams. Rabat – Despite offers of dialogue and pledged promises, Moroccan medical students stood together and fulfilled their promises to boycott final exams after nearly three months of continuous protests.

The National Commission for Medical Students announced the determination of all students to continue their “battle” against the “persistence” of the Ministry of Education in not meeting their demands.

Since March 25, the students have been carrying protests and strikes against poor medical training conditions, and the government’s decision to privatize medical education and services.

The medical students also condemned the lack of medical equipment in training institutions.

The Education and Health Ministries convened the students in an informal meeting, calling on them to suspend their strikes to take the final exams. However, students announced their determination to continue their protests and sit-ins as planned.

Oumaima Outani, a medical student and protestor told  Morocco World News that the students are striking against the “inhumane circumstances in which final year medical students take their internships.”

She added that  the medical students are not enjoying their strike.

We are ‘forced’ to strike

The  students parents also issued a press release to announce their support for the decision made by the medical students.

“We are sadly following what is going on and the manipulation of the future of our children and their right to study in favorable conditions,” said the statement from the students’ parents in the city of Casablanca.

The  press release also announced the parents’ determination to express solidarity with their children, demanding that the concerned parties to meet the legitimate rights of the students.

“The government, and the ministries of health and education, bear  the responsibility of the lost year.”

The statement added that the only real reform that the government can offer is to expand training spaces and  to mobilize with the necessary equipment to provide a satisfactory learning environment for the students.

“We refuse the policy of imposing a fait accompli … and we condemn all pressures exerted on our children to take the June 10 exams,” added the statement.

The  coordination of the medical students  announced that the strike and boycott were 100 % successful.

The statement comes after Minister of Education, and Vocational Training Said Amzazi said that  his department has taken the necessary measures to make up for the time that medical students have missed during the continuous protests.

He also warned that the ministry have decided on the dates of exams.“Those who will take the exams are welcome, and those who will miss it should shoulder their responsibility,” said Amzazi.

The Ministry of Health and the Ministry of Education also issued a joint statement announcing that necessary measures were taken to “ensure the right of all students to take the exams, in best circumstances and to take legal action against any person who obstructs its progress.” 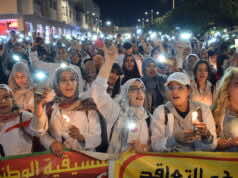