Despite government promises as early as November 2018, the scientific study has still not been released.

Rabat – The Moroccan government has reiterated that that keeping the Daylight Saving Time (DST), also known as the GMT+1 all year around is not a source of concern.

On Tuesday in Rabat, the minister delegate for Reform of Administration and Public Service, Mohamed BenAbdelkader, said that  GMT+1 year around has no impact on health.

The statement is part of the first findings of a “scientific study” ordered on the adoption of DST throughout the year.

At the House of Councillors, Benabdelkader said that the adoption of  DST throughout the year has “no impact on health from a scientific point of view, according to a study adopted” by the ministry.

He added that his ministry will release the findings of the study soon. However, the government previously promised to release the study findings when they initially adopted the GMT+1 policy.

The decision angered many Moroccan people who condemned the decision. The announcement of the change came only days before the country was set to turn back the clocks one hour with the end of DST on October 29, 2018.

Defending its decision, the government claimed that it had prepared a study that shows  the decision to switch to GMT+1 year round was based on an evaluation study.

On November 1, the spokesperson of the government, Mustapha El Khalfi, also promised that the government would issue the study used in the decision to stay on the DST “next week” in November 2018.

To date, the government has not yet disclosed the findings of the study.

In addition to El Khalfi, Benabdelkader also argued that the decision was based on a study that started in May 2018, and the government received the preliminary results of the study on October 9, 2018.

The official also claimed that the study aimed to evaluate the reaction of Moroccan citizens to time changes.

He also claimed that “we found that 68 percent of [Moroccans] prefer stability. The decision to maintain daylight saving time is a political decision.”

Calls to release the study

The decision generated anger not only from citizens but also from parliamentarians, who urged the government to release the study.

Ouahbi, a member of the Authenticity and Modernity Party (PAM), told Morocco World News that  if the change is based on a study, “I want to see these reports.”

Morocco now switches between GMT and DST only twice a year, rather than 4 times.

After the adoption of Decree 2.18.855, Morocco now changes g the clocks only twice for Ramadan. 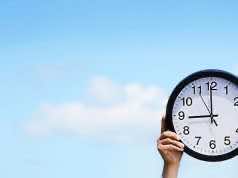 Reminder: Clocks in Morocco Will Go Back One Hour for Ramadan