Rabat – Mustapha Ramid, Moroccan Minister for Human Rights, posted a statement on Facebook page, Monday June 17, refuting reports that he had attended a nightclub in Rabat. The website Barlamane.com released an article stating that Ramid “who teaches others morality lessons went to a nightclub in Hay Ryad district at Rabat.”

In the article Barlamane.com remind readers that Ramid was one of the first to criticize Amina Maelainine, a member of the parliament, after pictures of her without a headscarf and in front of the famous “Moulin Rouge” in Paris were released. The article asks readers to question the moral credibility of the moralizing minister.

The website added: “In order to prevent Ramid from accusing us of lying and slander, we did not see him drinking […] but he had excellent time with those he went with.”

Ramid replied to the allegations by writing a post on his Facebook page stating that, “the website Barlamane.com once again fell into the sin of lying and slandering me, they have already done the same dirty thing more than once.”

“But the owners of the website did not have the courage to appear in court nor the ability of proving their statement, thus, it is legally recorded that it is a slanderous website.”

He pointed out that “Today, the website itself is practicing the sin of slandering me over and over, by claiming that I was seen one night last week in one of the nightclubs in Rabat where there is alcohol and women.”

“And thank God, because I never went to a nightclub during my entire life. I have never entered a restaurant by night.”

The minister finished his statement by calling on members of his party to verify his moral character. “On the other hand, I ask for the Deputy Chairman of the Party’s Integrity and Transparency Committee to investigate on this subject and take the decision that is required.” 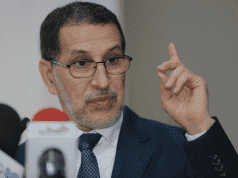