The last rebel-held territory of Idlib has been under intense bombardment since April, with hospitals and schools becoming key targets. 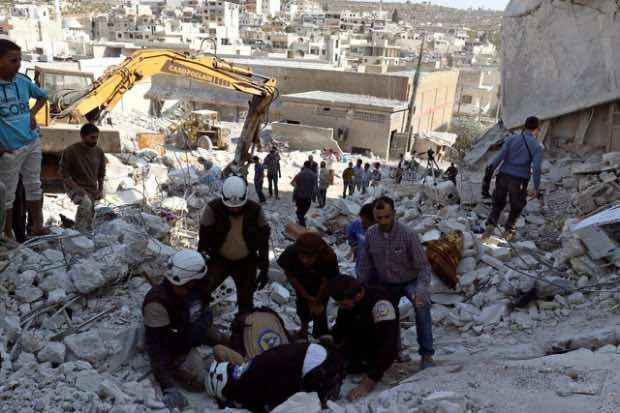 The latest attacks on civilians were in Idlib, the last-rebel held territory in northwestern Syria after eight years of civil war. Idlib is one of three cities included in a buffer zone deal signed by Russia and Turkey.

The buffer zone is intended to be protected from regime offenses, but the agreement was never fully implemented.

The planned demilitarized zone instead came under the administrative control of Hayat Tahrir al-Sham (HTS), a designated Salafist jihadist militant group. HTS control over Idlib has put the territory’s population of three million people at the forefront of Syrian and Russian offenses.

UN chief Antonio Guterres has classed the northwestern province of Idlib as the site of a humanitarian disaster.

The World Health Organization (WHO) confirmed 26 incidents of attacks on healthcare facilities, which are obligated to share their exact coordinates with military officials as a part of the UN’s deconfliction system. Some civilian facilities are now refusing to do so, as sharing their locations with warring parties makes them an easy target.

On June 19, the White Helmets civil defense group reported the deaths of at least seven civilians in Idlib due to Syrian government air raids. This follows another attack on June 15 in which four were killed and 15 were wounded. Scores of rebel fighters have also been killed in recent attacks.

Mark Lowcock, humanitarian chief of the UN, urged Russia and Syria to stop their attacks on civilians and civilian infrastructure at the UN Security Council session on June 19.

“A number of partners . . . have drawn the conclusion that hospital bombings are a deliberate tactic aimed at terrorizing people,” Lowcock said at the session.

Both Syria and Russia denied the UN’s allegations of terror at the Security Council session, questioning the sources of information. Russian UN Ambassador Vasily Nebenzia argued that all military activities were in response “to provocations from terrorists.”

More than 230 civilians have been killed in Idlib over the last six weeks, and an estimated 330,000 have fled to Turkey.