Rabat – The General Directorate for National Security (DGSN) has announced the crime statistics for the city of Casablanca over the first five months of 2019.

The DGSN arrested 52,406 people for various crimes, 10,289 of which were under national arrest warrants, states DGSN in a press release today, Monday, June 24.

Interventions relating to theft also decreased by 21.8% over the same period.

According to DGSN, the increase is due to DGSN’s focus on targeting drug trafficking, especially synthetic and psychotropic drugs. 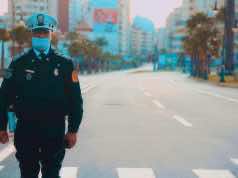