Rabat – Moroccan Zakaria Tijarti has kept his (WMTA) World Championship title in the category of under 66 kg on Saturday, June 22,  in Marrakech. The boxing champion retained his title by defeating of French opponent Youcef Mustapha Alias Totof.

The Moroccan boxer triumphed in a very hard, tactical and very close round.

Tijarti was Dutch champion in 2015, a champion of “Fight Sense European” in 2017, and won the 4th edition of Mohammed VI Big Prize for Kickboxing In 2018.

He told the media at the end of the battle, “It was a very competitive fight against a high level boxer who has huge experience in the ring.”

He continued “I thank the Moroccan audience, who came to help me in this significant fight and helped me to honor the Moroccan flag, from all areas of Morocco and Europe.”

Tijarti played thirty-five professional matches, with 32 wins, including seven by knockout, and only three losses before Saturday’s match.

This Gala evening also saw five more battles organized under the auspices of the Royal Moroccan Federation of kickboxing, Muay-thai, savate and other related sports. 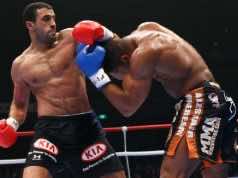 Badr Hari on Doping Rumors: ‘Facts Will Speak For Themselves’