While death penalty is not practised in Morocco, the Public Prosecution Office has asked the court of appeal to sentence the three main suspects to death.

Rabat  – The Public Prosecution called on  the Court of Appeal in Sale to give death penalty to three main suspects involved in the killing of two Scandinavian tourists near Mount Toubkal in December 2018.

Lawyer of the suspects Hafida Maksaoui told Morocco World News on Thursday, June 27, that the Public Prosecutor condemned the “savagery” of the crimes committed by the suspects, asking for the ultimate punishment.

The prosecutor’s representative, Madsaoui said, had asked for the court to hand a life sentence to the fourth main suspect involved in the crime.

The prosecutor also called on the court to hand verdicts ranging between 3 and 10 years to the remaining defendants who were not directly involved in the murders.

The report, outlining the horrific injuries sustained by the two victims, was also discussed during Thursday’s court session.

The report was disclosed at the Court of Appeal in Sale, where the hearings of the 24 suspects connected in the murder has been taking place since May 2.

The report showed that Danish tourist Louisa Vesterager Jespersen sustained 23 injuries. A rupture in the neck and decapitation caused her tragic death.

She was injured in her left eye, forehead, and left ear. She also sustained several other injuries to her left hand, fingers, and leg.

Norwegian victim Maren Ueland suffered seven injuries and two fractures, one of which was in her ribcage.

She also suffered from a deep wound of 20 centimeters on her throat.

The prosecution representative said that the findings of the autopsy demonstrate  the “savagery” of the crime committed by “human beasts.”

The Sale court closed the hearing of the case on June 21 following a series of court sessions with the 24 suspects allegedly involved in the case.

The four main suspects, who appeared in a video pledging allegiance to ISIS leader Abu Bakr Al Baghdadi last year, confessed the crimes attributed to them.

The four main suspects fa are facing multiple charges, including forming a gang to commit terror crimes, and intentionally taking a life in a premeditated attack.

In addition to the suspects, lawyers representing the victims want the country to bear its responsibility.

The lawyers claimed that Morocco shows the region as a tourist site “without providing safety” in the area.

The families of the victims, who hired the lawyers, did not specify the amount of compensation they are claiming from the state. 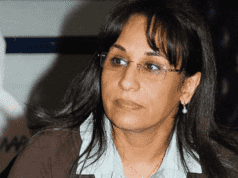