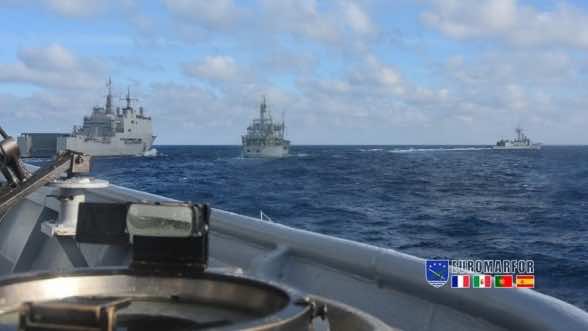 The newly arrived fleet under the European Maritime Force (EUROMARFOR), will participate in joint naval exercises with MNR, as announced by Far-Maroc, a website addressing defense issues nationally.

EUROMARFOR is a military maritime force founded in 1995 by four European countries: France, Italy, Portugal, and Spain, to carry out naval, air and amphibious operations.

It is expected that these maneuvers, called “Multi Cooperative Exercise”, are taking place early this week in Casablanca.

The fleet’s arrival reflects the significance of military cooperation between Europe and Morocco, the continent’s crucial partner for maintaining peace and stability in the Middle Eastern volatile region.

This is not the first time the Royal Moroccan Navy participates in a naval exercise of this kind.

Earlier this year, MNR took a training trip to Europe, receiving coaching in Germany, the Netherlands, and France.

The Special Forces Unit of the Royal Moroccan Navy is being trained by taking part in maneuvers with allied countries to promote and secure military cooperation.

Prior to Morocco’s navy Europe tour, the Moroccan-American “African Lion” joint exercises took place in the North African country between March and April 2019.

In the annual exercise, military units from 15 countries participated including Canada, Spain, Portugal, the UK, Italy, Senegal, Tunisia, Mauritania, the US, Austria, and Morocco.