Punishment is the natural lot of those who let down the trust of millions of countrymen, but the punishment should not be so prodigious as to annihilate the possibility of redemption. 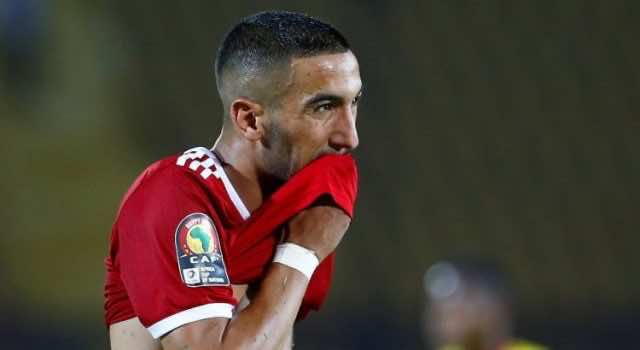 Rabat – Hakim Ziyech failed his CAN in Egypt. He was absent in vital moments and lacked difference-making-inspiration to propel Morocco among Africa’s best at this year’s continental showpiece.

But what he has done for Morocco in the past three years and the feeling, even as he slumbered in Egypt, that he was trying his utmost, means that he does not deserve the scorn of the hysteric chorus of naysayers thrashing him in news articles and on social media.

This time, Moroccans were not prepared for another debacle at the Africa Cup of Nations. They thought they had the coach, the team, and the individual talents to avert the humiliating fate of early exit that has tainted generations of Atlas Lions since 1976, the only exception being in Tunisia in 2004, where Morocco lost in the final to the host country.

As the Atlas Lions’ dramatic defeat by Benin started to sink in among fans, as millions of Moroccans powerlessly resigned to the prospect that they will spend another two years waiting, withstanding the anguish of a déjà-vu kind of fatality, it was clear that there would be consequences. But little could one predict that the groaning, the demands that things change, would reach the hysteria and character judgment they seem to have turned into over the past days.

In online comments and news reports, some have—quite rightly—called for the Atlas Lions to apologize, to send out heartfelt messages of penitence to appease the rightful wrath of their fans.

Sofiance Boufal, one of Morocco’s best performing players at the ongoing CAN, has responded to the cries of fans. “We are all very disappointed to leave CAN today, especially for the Moroccans,” the Celta Vigo striker recently said. “We beg your pardon. When I played, I tried to bring my maximum, and I think I did but here’s what I say: the penalties are a lottery, sometimes you win, sometimes you lose, but we’ll come back stronger, Insha’Allah!”

But that is hardly the most strikingly concerning episode of the hysteria-fused post-CAN spectacle after Morocco’s unexpected, frustrating elimination. As fans struggle to make peace with yet another devastating defeat, to realize that, actually, this generations’ best shot at continental glory was squandered in a match against a “playable” underdog, angry fans have resorted to trashing Hakim Ziyech, the team’s star player who completely missed his Egyptian tournament.

Elevated to the rank of “national hero” after a series of  scintillating performances that have contributed to making Morocco the much-fancied team it has become of late, the Ajax star is now being divested of all of the accolades and celebrations that had come his way. Some anguished fans are even questioning his commitment to Morocco, which apparently “is not really his country.”

“All we need to do is fire the coach and let go of all the foreign players. We need locals with the hunger to fight for their country and win,” one fan commented on Facebook in reaction to the news that the Moroccan Royal Football Federation has called for an “urgent meeting” with the coach, the players, and the technical staff to discuss the future of the national team.
On social media, Ziyech-directed outrage came in different guises.

Some were ridiculous; others were mildly resentful, obviously stemming from pain-stricken fans who may not have really meant what they had said of the Ajax forward; some criticisms hit a degree of common sense, asking that players, Ziyech the first, be “severely punished” for failing their professed mission for this particular tournament.

As a whole, however, a recurring criticism, a point that has been raised in different tones and modes of suggestion, has been about whether Zieych is truly committed to Morocco.

More still, the nay saying chorus touched a new nerve when suggestions flew that, after all, Morocco really does not need “European mercenaries” whose identification with the North African country is murky, tenuous, and fundamentally questionable. Moroccans of Ziyech’s type, the suggestion goes, do not give the best of themselves on the pitch because their heart has room for another country.

In an unconscionably condemnatory, Zieych-bashing article, La Tribune’s envoy to Cairo used the much-decried rhetorical tropes of Europe’s rightwing circles to lambast Ziyech’s apparently non-committal style of play when representing Morocco’s national colors. The article pointed at Ziyech’s “poor,” wanting linguistic skills in French and Arabic, suggesting that he is “not sufficiently integrated” in Morocco; that he has not made the necessary efforts to be considered part of Morocco’s social fabric.

“When you sign for a foreign club,” the La Tribune reporter wrote referring to Ziyech, “you make efforts to learn the local language. Why won’t you do the same for Morocco. I thought you liked the national jersey.”

Granted: Ziyech had a poor tournament in Egypt. Given his class and technical prowess—the Guardian ranked him among “the players to watch” ahead of the ongoing CAN—Moroccans had distinctly high expectations for Ziyech.

Instead, while the entire squad’s performance showed huge gaps between expectations and results, between promises and deliveries on the pitch, Ziyech was particularly underwhelming. In the outrageously demanding moments, he flickered. The late-minute penalty miss against Benin was an appalling, heartbreaking scene to bear for Moroccans. In Egypt, Ziyech looked like a liability, instead of the revered added value fans of football within and without Morocco had expected to see.

But does that legitimate the impossibly vindictive bashing he now faces? Will the viscerally resentful comments about his apparently insufficient Moroccanness change anything? When Ziyech, who could have chosen to play for the Netherlands, where he was greatly adored before opting for Morocco, was asked why he unexpectedly chose Morocco over the country that had given him the opportunities and resources to be the talented footballer he now is, he suggested that he would be safe from identity-inspired bashing.

In Morocco, he appeared to argue, no one would ever question his patriotism should things not go as planned, should he let fans down by failing to seize some crucial moments. “My head said the Netherlands, but my heart said Morocco,” he had answered. This should have never escaped the notice of those now questioning his love for Morocco. Not only because it whitewashes all the great things he has done while wearing the Moroccan jersey, but because it is utterly self-destructive for Morocco’s aspirations to count on its talented diaspora.

No, this is not about blindly taking the side of defeat, of disappointment, of unfulfilled promises. Ziyech and his teammates could have done better; they had everything to shine, to make a lasting impact on continental football. But they failed, and they know it, and players should feel as pained and grief-stricken as their 35 million compatriots; or more. But what Moroccans should be speaking about is why what happened actually happened and where to go from there. Name-calling and character thrashing won’t help.

Perhaps Moroccans should be talking about squandered goal scoring opportunities; about reshuffling the technical and coaching staff to instill a new esprit de corps in the team; about the need to have a certain quota of local players because they are more used to the insanely different kind of football played in African tournaments—physical and allowing extremely limited space. For now, though, the cacophony of resentful affirmations deepens the nation’s painful dilemma, instead of solving it.

In such moments of national gravity—Morocco is unquestionably a football-crazed country—it is more useful that Moroccans ask the right questions than shun players they may—will, in fact—need in the future.

Seen from the comfort of a TV screen or a stadium seat, Ziyech’s penalty miss boils down to his character—flippancy and lack of focus in key moments. Anyone could have scored that, rightfully angry fans have groaned. But on second thought, this is not the first time that excellent, passionately patriotic and focused players have squandered such opportunities.

There have been suggestions that, anyway, Zieych and his teammates were a bunch of overrated lads. That Morocco seemed a good team only because the Moroccan media had exaggerated the exploits of the team and its coach, and placed Morocco where it does not belong in African football.

While the suggestion stands some shallow scrutiny, it becomes inescapably laughable in the face of what happened in Russia at the latest World Cup as “small teams” humiliated big, established favorites. What about Madagascar topping its group and progressing to the round of 8? Or South Africa, which Morocco defeated in the group stage, beating a Mohammed Salah-led Egypt in spite of the exultant chants of more than 75,000 Egyptians cheering their team up?

The truth is, football has evolved across the world, as it has in African countries not traditionally known for having good teams. What we need is a national moment of reckoning whereby Moroccans question their old footballing certainties and habits and think of how to put together a team and coaching staff to reinforce the strengths and resources already available.

Failing to meet expectations should come with consequences, with draconian measures to avert a repeat. Punishment is the natural lot of those who let down the unfailing trust and support of millions of countrymen, but the punishment should not be so prodigious as to annihilate the possibility of redemption, and the hope of bouncing back.