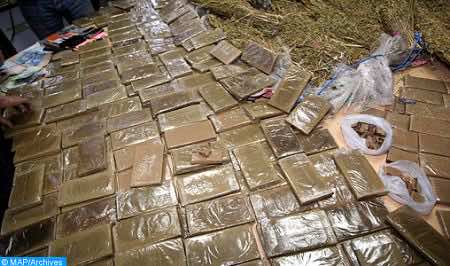 By
Kawtar Ennaji
-
Kawtar Ennaji is a journalist and translator at Morocco World News, MA holder from King Fahd School of Translation
Jul 8, 2019
Spread the love

According to a statement by the Directorate General of National Security (DGSN), the security services found the record quantity of 27.3 tons of cannabis resin aboard three international cargo transport trucks registered in Morocco.

The traffickers had distributed the drugs between 16 containers in the trailers of the three trucks.

The DGSN added that the operation resulted in the arrest of three drivers and three assistants. All of the suspects are Moroccan citizens and are aged between 31 and 50 years.

The suspects were placed in custody pending an investigation by the prefectural police department. The investigation into the possible national and international ramifications of the case will be carried out under the supervision of the prosecutor’s office.

The  arrests are part of the ongoing security operations conducted by the security services against international drug trafficking.

Just last week, a similar operation, carried out on June 1, by Tanger-Med security services in close collaboration with the services of the General Directorate of Territorial Surveillance (DGST) resulted in the seizure of 568,000 ecstasy tablets concealed in a truck.