The UAE has recently renewed its “constant” position in favor of Morocco’s territorial integrity. 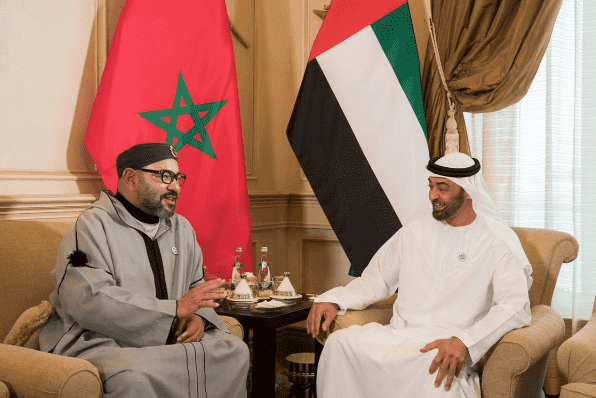 During the conversation between the Crown Prince and the Moroccan monarch, the two leaders discussed  the warm relations between Morocco and the UAE.

Bin Zayed tweeted that: “Mohamed bin Zayed received a telephone call from Moroccan King Mohammed VI, during which they discussed the brotherly relations between the two countries.

The King and bin Zayed also discussed “ways to further develop” diplomatic ties to “serve the common interests of both countries and peoples.”

The tweet added that the two royals also discussed the latest regional developments, as well as exchanging views on common concerns.

The phone call comes following reports of alleged friction between Morocco and UAE. The rumors came to the forefront when Morocco’s Foreign Affairs Minister Nasser Bourita excluded the UAE from his tour to the Gulf in April.

The reports emerged when the North African country expressed decided not to side with the Gulf countries on certain regional issues, including Yemen and Libyan crisis. Reports also suggested that the friction between Morocco and the UAE also extended to Morocco’s relations with Saudi Arabia.

Earlier this year, the Moroccan government withdrew from the war in Yemen, citing humanitarian concerns.

In response to the rumors, Saudi Arabia and the UAE expressed satisfaction with the historical relations unifying Morocco with its Gulf allies.

In June, the UAE reiterated its constant  support for Morocco’s Autonomy Plan,.The Moroccan government submitted the Autonomy Plan to the UN in 2007 as a pragmatic and realistic solution  to definitively settle the Western Sahara conflict.

The gulf kingdom reassured Morocco of its support for the territorial integrity of the North African country, as well as the ongoing  historical diplomatic ties between the two countries.