According to a complaint from the Ethiopian Football Federation, the FRMF president beat the Ethiopian referee following the RS Berkane- Al Zamalek match. .

Rabat – The African Confederation of Football (CAF) has  reportedly handed President of Morocco’s Royal Football Federation,Fouzi Lekjaa, a one year suspension from all football related activities within the CAF.

The alleged suspension comes after his behavior during the second leg of the CAF Confederation Cup, when Moroccan football club RS Berkane lost to Egyptian side Al Zamalek on May 26.

Neither CAF nor the FRMF have confirmed the rumors of Lekjaa’s suspension.

Al Mountakhab said that Ahmad Ahmad, President of CAF was not aware of the decision to suspend the FRMF president.  The sports platform also added that Ahmad has warned against such a move.

On June 5, the EFE released a statement claiming: “After the game, during the medal ceremony, the third deputy president of CAF, president of Morocco Football Association and honorable president of RS Berkane FC, MR Fawzy Lkeia ,[sic] beat n MS Bamalek Tessema with head butt with aggressive and forceful manner.”

The EFE also accused of RS Berkane  of harassing the referee.

“After players saw MR Fawzy Lekia [sic] in action they started to harass and kick him fortunately he was saved by securities.”

Following the game, Lekjaa strongly condemned the referee’s judgement during the match.

FRMF  addressed a letter to CAF describing the referee’s performance as “scandalous” and “shameful.”

According to FRMF, the game between the two sides was fraught with “bad interpretation and application of the rules.” In addition to controversially favoring the Egyptian side in the course of the game, the letter suggested that the referee “shamefully” ignored a rule that cost Berkane the penalty shootout.

FRMF argued that the Ethiopian referee of the match “allowed a player who should have been sent off to continue to play and influence the outcome of the match.” 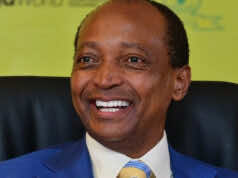