The football player described the situation as a “miscommunication” between him and the minister.

Rabat – Moroccan international football player Hakim Ziyech has apologized to Minister of Youth and SportsRachid Talbi Alami after accusing him of lying.

On his Instagram, the football player explained the situation, emphasizing that it was just a “miscommunication from both sides . good luck Minister with continuing your good work for the country.”

Ziyech apologized to Alami after accusing him of lying. The accusation came after the minister claimed that Ziyech might retire internationally.

On Monday, Alami said, in a plenary session at the parliament, that Ziyech had not answered 23 phone calls. He added that the football player also said that he refuses to “continue in these conditions and this atmosphere.”

The minister’s statement came three days after Morocco’s defeat against Benin on July 5 in the knockout stage of the Africa Cup of Nations (CAN) 2019. Ziyech received a backlash for missing a penalty during the match, failing to break the tie with Benin and leading to a penalty shootout. 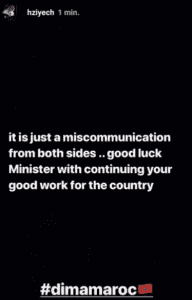