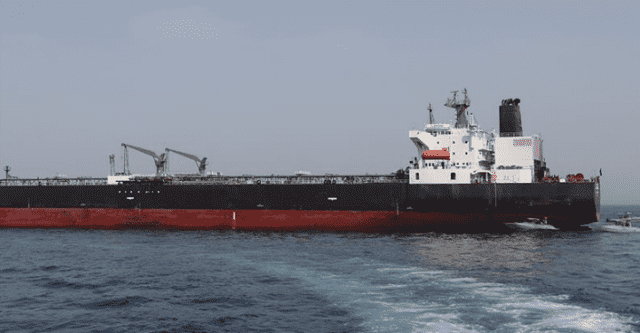 Rabat – The United Kingdom‘s government claimed on Thursday, July 11, that five Iranian Islamic Revolutionary Guard Corps (IRGC) vessels had unsuccessfully attempted to hinder the passage of a British oil tanker through the Strait of Hormuz.

According to a statement from the UK government, on Wednesday, July 10,  the Iranian ships withdrew after receiving “verbal warnings” from a British warship accompanying the British tanker, Heritage.

“We are concerned by this action and continue to urge the Iranian authorities to deescalate the situation in the region.”

“Apparently the British tanker has passed; what they have said themselves and the claims that have been made are for creating tension and these claims have no value,” Zarif said.

The IRGC also denied any involvement in the incident in a statement issued on Thursday, July 11.

Read Also: UK Ambassador to US Resigns, Says it was ‘Impossible to Continue’

A manned U.S. reconnaissance aircraft watched the scene unfold from above.

The US observers reported that the British warship was less than five miles behind the tanker, but soon intercepted the Iranian boats and threatened to open fire. Iranian forces left without opening fire.

“The Royal Navy HMS Montrose, which was also there, pointed its guns at the boats and warned them over radio, at which point they dispersed,” one of the US officials said.

“It was harassment and an attempt to interfere with the passage,” the other US official added.

The US military acknowledged the incident in a statement but did not disclose any further details.

“Commanding control in the military government and especially in the IRGC is very linear and it is unlikely that anything like this would have happened without clear directives through commanding officers, through linear lines of ranks,” said Al-Jazeera’s Zein Basravi.

rReporting from Tehran, he  hinted that it is not clear whether Iran was carrying out a probing attack or “a rogue group of military on the ground.”

The incident came after Iranian President Hassan Rouhani warned on Wednesday, July 10, that the UK would face “repercussions” following the seizure of an Iranian oil tanker last week off the coast of Gibraltar.

The British government said the Iranian tanker was suspected to be carrying two million barrels of crude oil to Syria. This move was in breach of European Union sanctions against the government of Syrian President Bashar al-Assad.

Tehran denied that the tanker was affiliated with Syria and interpreted its seizure as “piracy.” Iran also summoned the British envoy to Iran to protest against the action.

Is there a way out of the Iran-US crisis?

Tensions between Iran and the US, as well as its allies, have largely increased since last year when Washington unilaterally withdrew from a landmark nuclear deal signed between Tehran and world powers in 2015.

Since then, the administration of US President Donald Trump has accelerated economic sanctions against Iran. He has also moved to bring the country’s oil exports to zero as part of a “maximum pressure” policy to grant regional security.

Several oil tankers were attacked in the waters near Iran’s southern coast in May and June 2019, for which the US blamed Iran; Tehran denied any involvement.

Last month, Iran shot down a US drone near the Strait of Hormuz, prompting Trump to order retaliatory air raid, only to call them off at the last minute.

On Tuesday, July 9, the US announced its decision to form a military coalition to safeguard strategic waters off the coasts of Iran and Yemen.

Amid the pressure created by sanctions, Iran has delivered threats to disrupt oil flow through the strategic Strait.

In April 2019, an IRGC commander threatened to block all exports through the Strait if the blockade on Iranian exports were to continue.