Photos of Moroccans and Algerians celebrating together have flooded social media platforms. 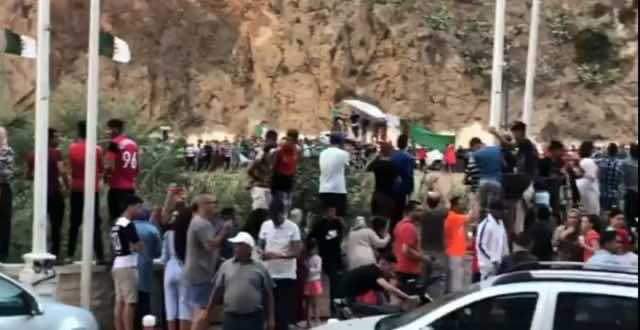 Rabat – Upon Algeria’s qualification to the semi-final round of the African Cup of Nations (CAN 2019) on Thursday, July 11, many Moroccans joined their Algerian brothers at the Morocco-Algeria border. Fans from both nations shared their joy at Algeria’s success.

Moroccans can be seen in a series of viral videos expressing their joy as though it were their national team that had qualified.

The footage shows the depth of the brotherhood between Moroccan and Algerian citizens, despite tensions in the political arena.

In a further show of this brotherhood, two Algerians climbed the border fence in order to join the Moroccan supporters on the other side. The scene was captured on video.

Morocco and Algeria have a long shared history, with many citizens on both sides of the border sharing ancestry.

The images and videos inundating social media are proof that politics is just a tool to divide nations and create conflicts and that sports can unify people regardless of the color of their skin, religion, or beliefs.

Since frustrated Moroccan fans saw the Atlas Lions lose to the Benin Squirrels and leave the CAN 2019 on Friday, July 5, many have chosen to support Algeria. Since then, social media platforms have been inundated with images of the brotherhood between fans.

A hashtag was even launched, called # khawa_khawa (brothers_brothers), meant to cheer on both nations in the African Cup of Nations. The ‘brother’ hashtag refers to Moroccan football team captain Mehdi Benatia whose mother is Algerian, and Algeria’s winger Riyad Mahrez whose maternal grandmother is Moroccan.