Moroccan Judge, Jamila Sedqi, has joined the Administrative Tribunal of the African Union. 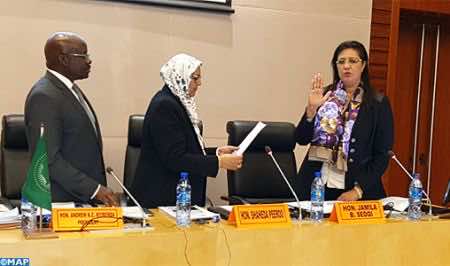 Rabat – Moroccan Judge, Jamila Sedqi, took the oath before the Commission of the African Union (AU) on Wednesday, July 10 in Addis Ababa. She will now hold the position of Magistrate at the Administrative Tribunal of the AU.

The Moroccan candidacy for this position was ratified at the 32nd AU Summit held in February 2019 in Addis Ababa.

Jamila Sedqi was appointed for a four-year term as a Magistrate at the Administrative Tribunal along with two other judges, Sylvester Mainga from Namibia and Paulo Comoane from Mozambique.

Upon her appointment, Ms. Jamila Sedqi became the first Moroccan woman to hold the position of Magistrate at the Administrative Court of the AU.

Attorney General at Morocco’s Court of Cassation, Magistrate of Liaison, and Legal Advisor in the Moroccan Mission to the European Union, Sedqi’s years of experience qualify her for this respected role.