Of the 18 Moroccan nationals present at the time of the bombing at the Tajoura detention center, 7 are dead and 3 are still missing. 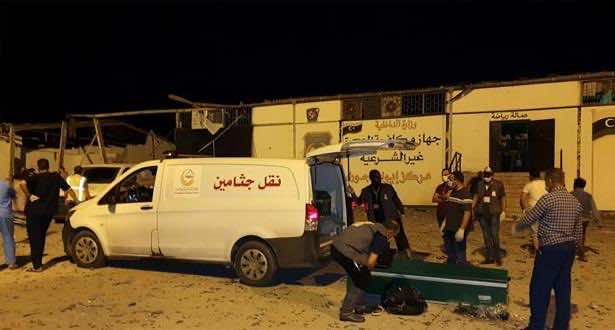 By
Kawtar Ennaji
-
Kawtar Ennaji is a journalist and translator at Morocco World News, MA holder from King Fahd School of Translation
Jul 13, 2019
Spread the love

Rabat – The Consulate General of Morocco in Tunisia began, on July 12,  the process of repatriating the human remains of Moroccans who died when airstrikes hit the detention center in Tajoura (11 km east of Tripoli) earlier this month.

A statement from the Consulate General specified that the Consulate started the process in collaboration with the Ministry of Foreign Affairs and International Cooperation. The Ministry Delegate responsible for Moroccans Residing Abroad and Migration Affairs is also involved in the operation.

“The Ministry of Foreign Affairs has informed the families of the victims of the death of their children and of the arrival of the bodies to Mohammed V International Airport in Casablanca,” the statement added.

The Consulate General, with the assistance of Moroccan and Libyan authorities, was responsible for officially identifying the bombing victims. The consulate also carried out all administrative proceedings concerning the repatriation of the bodies. .

In coordination with the Libyan Red Crescent, the Consulate General continues to monitor the condition of the Moroccan nationals wounded in the bombings. Upon their recovery, the consulate will arrange for their transport to Morocco. .

Reiterating its condolences to the families of the victims, the General Consulate invited them to communicate with one of the two crisis units at the Ministry of Foreign Affairs and International Cooperation (00212613500678) and the Consulate General of Morocco in Tunisia (0021698765801).

In total, 18 Moroccan citizens were present at the center at the time of the bombing. Preliminary reports estimate the death toll for Moroccan nationals at 7. Eight Moroccans were wounded and a further 3 are still missing.