CAS says it has “taken note” of both side’s complaints and the body of evidence. The final verdict will be made public by July 31. 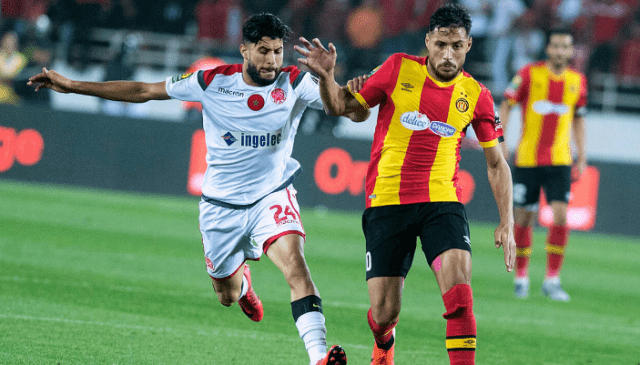 Rabat – The saga of the scandalous ES Tunis vs. Wydad of Casablanca match is still ongoing, undimmed, and fueling debates in international football’s highest body of controversy arbitration. But a final, irrevocable decision could be arrived by the end of this month.

In an official statement shared over the weekend, on July 13, the Court of Arbitration for Sports (CAS), the independent body tasked with resolving sports-related controversies, conflicts other specialized bodies failed to settle, announced that it would deliver a verdict on the EST-Wydad wrangle by July 31.

The background: Mutual accusations of manipulations

CAS’s statement comes amid heightened hostility and a climate of mutual distrust between Wydad and EST executive boards. Both clubs have accused the other of having skewed African club football in their favor in recent years.

The divergence between the two clubs started in late May, when the two played the final of the African Champions League over a two-legged confrontation.

During the first leg in Rabat, the match ended in a 1-1 draw. But the refereeing seemed blissfully unaware of regulations when they did not favor the Tunisian side.

On that occasion, both the Moroccan and Tunisian media spoke of “unfair,” “biased,” and “scandalous” refereeing that ended up “robbing” the Moroccans of a victory they roundly deserved. The Confederation of African Football (CAF) later punished Gehad Grisha, the Egyptian referee of the first leg. But the 1-1 result stood.

The second leg, which was played a week after the first at the Rades Stadium, in the outskirts of Tunis, was just as shrouded in controversy.

In that match, ES Tunis was more dominant and more present in the first minutes; the Tunisian club scored before the end of the first half. But Wydad, who had become more spirited after the match resumed, overwhelmed their Tunisian hosts in the second half, scoring an equalizer at the 57th minute.

Bakary Gassama, the game’s Gambian referee, wrongly ruled out the goal, however.  Gassama decided the Wydad player was offside. After minutes of heated discussion, with Wydad players insisting that the referee checked VAR, the video system referees now rely on for clarification when dealing with delicate decisions, the Gambian official decided to end the match.

CAF then decided to declare EST as the winners, arguing that Wydad players refused to resume the game after the referee rejected their call for consulting VAR. But Wydad contested CAF’s decision.

The president of the Moroccan club argued immediately after the fiasco that his club never refused to resume the match. Instead, he explained, everything had been set up, manipulated by the Tunisian club for the game’s result to be of their liking. He called the event a “disgrace” and an “insult” to African football, emphasizing the fact that VAR was defective and no one knew except EST staff and players.

Meeting on June 5 in Paris in the heat of the controversy, CAF’s disciplinary body overruled the earlier decision that EST were the winners of the match.

The meeting ruled instead that the match be replayed at the end of the now ongoing African Cup of Nations. To avoid a repeat of the controversy-drenched experiences over both legs, CAF said the rematch would be played a “neutral pitch.”

No one is happy with the rematch option

From the legal battle going on between the two clubs, however, it appears none of them is particularly content with CAF’s ruling of a rematch.

EST argues that CAF’ calling to annul an already sealed match is unprecedented in football and against the game’s spirit. Once a game’s winner is decided, there is no going back, no matter the dubious circumstances that may have led to the win, the Tunisian side appears to have claimed in defense of its position, according to CAS’ statement.

There are also claims about the Tunisian club challenging CAF’s decision as “biased” and “manipulated” to suit the interests of a Moroccan club.

Ahmad Ahmad, the CAF president, is a self-declared “lover” of Morocco, in recognition of what the kingdom has done over the years for the advancement of African football.

As a result, EST’s CAS file is believed to have channeled Ahmad’s close relationship with Morocco, presenting the closeness between Ahmad and Fouzi Lekjaa, the president of the Moroccan Royal Football Federation, as one solid reason why an organization led by the former would bend the rules in favor of the latter’s country.

For its part, Wydad is building its cause on the “scandalous” defection of the VAR system on match day.

An important note is that CAF’s decision to overrule its earliest call in favor of EST was arrived at after “concordant evidence” showed that the Tunisian club may have knowingly left VAR unattended to hours before the game against Wydad.

In addition to this, reports that Wydad officials and players did not know about VAR not being operational later buttressed suspicions that the Tunisian club “deliberately” created the VAR incident and hoped the confusion would benefit them.

In its appeal to CAS, Wydad’s executive board essentially put its fingers on this hot-button issue of EST “deliberately tricking” the VAR system. Wydad insisted such a “trick” was in flying defiance of the game’s founding “fair play” rules.

Because of this, Wydad’s appeal maintained, the rematch decision should be overruled for the Casablanca club to be declared the “rightful winners” of this year’s African champions League.

CAS says it has “taken note” of both side’s complaints and body of evidence and that its final verdict will be made public by the end of this month, by July 31.

But with politics having largely entered the scene, and polarization having reached a level so deep that the tug-of-war between two football clubs has widely been interpreted as a battle for national honor, it is to be seen whether CAS’s verdict will appease both sides’ burning desire for revenge.